If last year’s hallmark in Haiti was corruption, this year’s is an uprising against it.

Large demonstrations began in the late summer with millions taking to the streets in cities and towns across Haiti to demand transparency and trials for the plundering of an estimated $3.8 billion in funds from the PetroCaribe account, a solidarity fund established by Venezuela to finance projects benefitting the Haitian people, like schools, hospitals, clinics, and roads.

the protests’ principal call has morphed into a demand for Jovenel Moïse’s resignation and an overhaul of the Haitian state.

But by the end of the year, the protests’ principal call has morphed into a demand for Pres. Jovenel Moïse’s resignation and an overhaul of the Haitian state.

Historically, such mobilizations tend to slow during December, only to resume with renewed vigor in the new year. The broad and deep discontent with the regime’s corruption and double-talk in the face of growing economic crisis, inflation, and poverty suggest that this pattern will repeat itself.

However, the opposition is weaker and more divided than ever, with no clear, undisputed leadership in sight. Nonetheless, progressive forces are acutely aware of this void and are working feverishly, with extremely limited resources, to build a new party that can act as a vanguard.

Meanwhile, in the U.S., Haitians have mobilized in response to Pres. Donald Trump’s “shithole” remarks in January, as well as his cut-off of Temporary Protected Status (TPS) for some 50,000 Haitians.

The following is a brief review of significant dates in Haiti and its diaspora from the past 12 months.

Jan. 11, 2018:
In a meeting to negotiate immigration quotas with Congressional leaders, Pres. Donald Trump refers to Haiti, among other countries, as a “shithole,” provoking the ire of Haitians worldwide.

Jan. 13, 2018:
In response to Trump’s racist remarks, dozens of activists from the New York metro area meet at Haïti Liberté newspaper in Brooklyn to form the 1804 Movement for All Immigrants coalition.

Jan. 15, 2018:
Some 12,000 Haitians and their supporters rally in New York’s Times Square to denounce Trump’s racist and anti-immigrant remarks and policies.

Jan. 19, 2018:
Hundreds of Haitians and their supporters march from Brooklyn’s Grand Army Plaza, across the Brooklyn Bridge, to the Trump Building at Manhattan’s 40 Wall Street, where they denounce the racist U.S. president in a spirited rally.

Jan. 24, 2018:
In Maryland’s U.S. District Court, the NAACP Legal Defense and Educational Fund sues the U.S. government in an effort to stop the Department of Homeland Security’s November 2017 decision to rescind Haitians’ TPS, which officially ends on Jul. 22, 2019.

Jan. 26, 2018:
Pres. Jovenel Moïse with his wife and three kids travel to Rome, Italy to meet with Pope Francis at the Vatican.

Feb. 12, 2018:
Downtown Port-au-Prince’s Hyppolite Market, also known as the Iron Market, is burned by vandals, destroying the wares and livelihood of thousands of small merchants with stalls there.

Feb. 20, 2018:
The murder of a Haitian couple in the southwestern Dominican town of Pédernales ignites days of violence there and in the neighboring Haitian town of Anse à Pitres.

Feb. 26, 2018:
After lawsuits concerning the Haitian government’s embezzlement of PetroCaribe funds are filed, Susan D. Page, the head of the United Nations Mission to Support Justice in Haiti (MINUJUSTH) salutes “the struggle against corruption and impunity,” sparking a public feud with Pres. Jovenel Moïse. It eventually ends in her replacement by Mamadou Diallo in May.

Mar. 5, 2018:
Haitian officials announce that the IMF has dictated the elimination of government price supports to the state power authority, Electricity of Haiti (EDH).

Mar. 8, 2018:
Former Haitian senator Rudolph Henry Boulos is found guilty of poisoning dozens of Haitian children in 1996 with medicine from his Pharval Laboratories. He’s sentenced to six months in jail and a fine of three million gourdes.

Mar. 28, 2018:
To appease and divert popular anger, the Haitian government launches an ill-fated attempt at “national dialogue” with a Pilotage Committee and Technical Secretariat for the Organization of the Sectorial General States (CPSTOEGS). Numerous people are shocked to be named to the committee or pull out after public outrage, including intellectual Claude Moïse, Archbishop Louis Kébreau, and politician Evans Paul.

Apr. 10, 2018:
For the first time, China and Russia abstain from the Security Council vote renewing the one-year mandate of the MINUJUSTH, auguring trouble for the occupation force’s renewal in 2019.

Apr. 28, 2018:
In Cap Haïtien, journalist Jacques Dubois dies and many are injured after police create pandemonium by firing teargas into an auditorium where Senators Youri Latortue and Jacques Sauveur Jean are talking about the PetroCaribe issue. 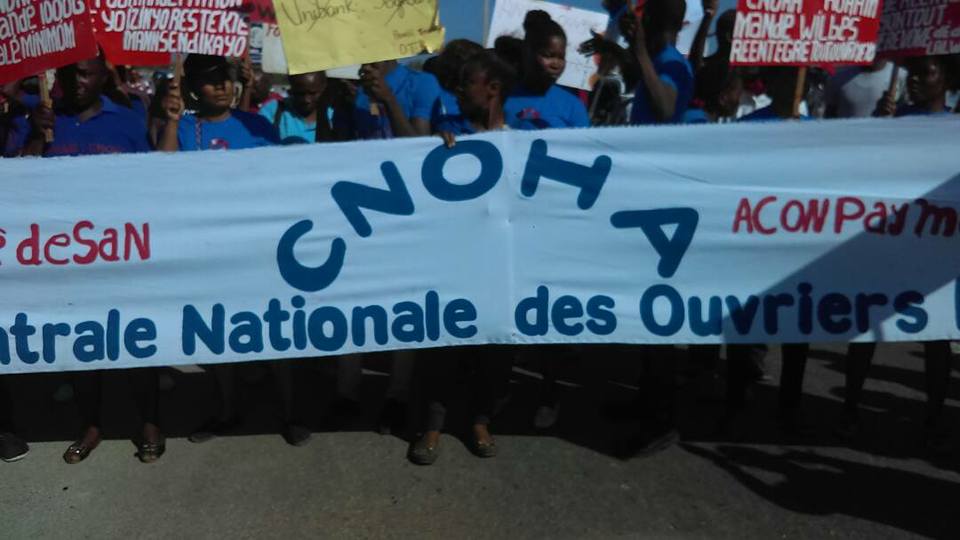 May 7, 2018:
At Port-au-Prince’s Karibe Hotel, Pres. Jovenel Moïse is booed by the audience at the 1st International Forum of Haiti’s Elected Women.

May 9, 2018:
The Haitian government announces that, as demanded by the IMF, it will cut its price supports to gasoline, diesel, and kerosene. Government thugs threaten and repress student demonstrators who protest on May 11 against the pending fuel price hikes, demanding where PetroCaribe, phone tax, and earthquake relief monies went.

May 19, 2018:
In Washington, DC, the 1804 Movement for All Immigrants rallies Haitians and their supporters for a demonstration in front of the White House to denounce Pres. Trump’s “shithole” statement and TPS cut-off.

May 20,2018:
Haiti abstains from U.S.-sponsored vote at the Organization of American States (OAS) to condemn Venezuela.

May 26 – Jun. 1, 2018:
Pres. Jovenel Moïse leads a 30-member delegation on a “state visit” to Taiwan (the so-called “Republic of China”). Moïse is looking for money, Taiwan for diplomatic recognition, which is dwindling worldwide, down to only 16 nations.

Jun.13, 2018:
The Haitian Supreme Court annuls a 2015 ruling which freed accused drug-dealers Woodly Ethéart (Sonson la Familia) and Rénel Nelfort (le Récif), ordering them back to jail and to be retried.

Aug. 14, 2018:
Jean Yves Blot is ousted as the Rector of Haiti’s State University after a year of protests by students for his running over student John Rock Gourgueder in 2017.

Sep. 2 & 4, 2018:
The first two major demonstrations demanding transparency about how PetroCaribe funds were spent take place in Port-au-Prince’s Delmas and Cité Soleil respectively. They are followed by similar demonstrations in Montreal, New York, Miami, and other cities where Haitians live abroad.

Sep. 14, 2018:
Jean Henry Céant is ratified by both houses of Haiti’s parliament.

Sep. 27, 2018:
Pres. Jovenel Moïse addresses the UN General Assembly, unexpectedly omitting any mention of Taiwan and criticizing the IMF’s austerity dictates and the UN’s impunity for introducing cholera into Haiti.

Oct. 8, 2018:
The government raises the daily minimum wage in seven different employment categories. For assembly workers, it goes from 350 gourdes to only 420 gourdes ($5.42) instead of the 1000 gourdes demanded by workers in many demonstrations.

Oct. 29, 2018:
Pres. Jovenel Moïse is booed when addressing the first Congress of the Federation of Haiti’s Mayors (FENAMH) in Port-au-Prince.

Nov. 13, 2018:
In an attempt to terrorize and intimidate, government-aligned gangs kill at least 59 people, leaving their mutilated bodies in the streets, rape seven women, and burn 150 houses during attacks in Port-au-Prince’s La Saline slum.

Nov. 18-20, 2018:
On the anniversary of the Battle of Vertières, giant demonstrations take place around Haiti demanding PetroCaribe justice and Jovenel Moïses’ resignation. They are followed by two days of general strike.

Nov. 24, 2018:
Eight people are killed, including four customs agents, during a violent confrontation at the Haitian border town of Malpasse.

Dec. 21-22, 2018:
In the northern town of Limbé, three people are killed and six houses burned during an apparent political dispute surrounding a government-aligned deputy.