Mar. 20, 2013 marks the second anniversary of a patently illegal and exclusionary election that brought President Michel Martelly to power.

The first round of that election, held on Nov. 28, 2010, was a complete fiasco, marred by disorganization, voter fraud, and disenfranchisement. Furthermore, months earlier, Haiti’s largest party, the Lavalas Family of former President Jean-Bertrand Aristide, had been illegally and arbitrarily excluded from fielding a candidate.

Thirteen of the 18 presidential candidates held a joint press conference and issued a joint statement the same day calling for the election to be annulled and reheld. 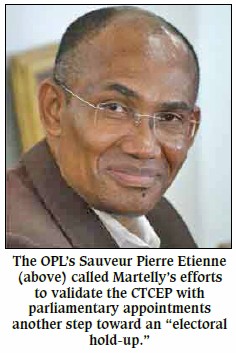 But Edmond Mulet, the head of the UN military occupation force known as MINUSTAH, called two of the candidates – Mirlande Manigat and Michel Martelly – and assured them they were front-runners. Jettisoning principle, the two about-faced and backtracked on their call for annulment. Haiti’s Provisional Electoral Council (CEP) announced first round results on Dec. 7, saying Manigat had placed first and Jude Célestin of the ruling party, Unity, second. Martelly had placed a close third, edged out by about 7,000 votes, the CEP said. The Haitian Constitution says that the CEP is the “final arbiter” of all Haitian elections.

“There was enormous political pressure brought to bear by the United States and its allies – the same countries who dominated the OAS Mission – for Haiti’s CEP to accept the Mission’s reversal of the first round election results,” the Center for Economic and Policy Research (CEPR) explained in an August 2011 report on the OAS intervention. “U.S. Ambassador to the UN Susan Rice threatened Haiti with a possible cut-off of aid if the government did not accept the Mission’s recommendations… According to multiple reports, ‘the international community …. threatened [then Haitian President René] Préval with immediate exile if he does not bow to their interpretation of election results.’”

Furthermore, the OAS Mission “did not establish any legal, statistical, or other logical basis for its conclusions,” the CEPR study found. In short, the OAS overruled Haiti’s CEP “for political reasons,” the CEPR concluded.

However, the CEP, Haiti’s “final arbiter” in elections, never validated the OAS findings. And the OAS was perfectly aware of this. On Mar. 19, 2011, the day before the election, Colin Granderson, the head of the OAS/Caricom election observer team, acknowledged to Haïti Liberté and other journalists that the election was illegal because the CEP had not signed off on the first round. “It is one of our concerns,” he said.

Martelly went on to win the Mar. 20 run-off, which, like the first round, drew less than 25% of Haiti’s electorate, a record low turn-out for a presidential election not just in Haiti, but in the hemisphere.

Having outrageously meddled in Haiti’s sovereign electoral process, Washington continues down the same road today with Martelly as its apparently gleeful accomplice. This week, the U.S. Embassy tried to push the presidents of Haiti’s Senate and Chamber of Deputies to confirm three members proposed by a Bicameral Parliamentary Commission to the Transitory College of the Permanent Electoral Council (CTCEP). The CTCEP is a completely unconstitutional body concocted in response to the outcry over Martelly’s illegal and heavy-handed formation of a Permanent Electoral Council. Many senators and deputies have called on Martelly to simply select, in conjunction with the Parliament, a compromise Provisional Electoral Council to hold long delayed elections for one-third of the Senate’s seats, which expired last May. This is the path prescribed by Haiti’s Constitution.

To complicate matters further, Senate president Simon Dieuseul Desras is said to be traveling in Haiti’s provinces. Sen. Andris Riché from the Struggling People’s Organization (OPL) is acting in his stead and claims that Desras gave him a green-light to proceed with the vote. But Sauveur Pierre Etienne, the OPL’s coordinator, has called Martelly’s and Washington’s effort to establish the CTCEP, which would be stacked with Martelly’s hand-picked representatives, an “electoral hold-up.”

A Haitian proverb says “A leaky house can fool the sun, but it can’t fool the rain.” The popular movement which brought Aristide to power in 1990 and 2000 has often been compared to water, specifically a Lavalas, meaning flood in Kreyòl. The leaky house created by the March 2011 elections appears to be flooding from a rising tide of protest as people around Haiti march against Martelly’s cavalier, corrupt and repressive regime, set in place, once again, by Washington. A bogus electoral council, which can only produce another bogus election, will only make matters worse.