Joseph Wilfrid “Ti Do” Lavaud, 62, the guitarist and drummer who was a fixture at the side of Annette “Sò An” Auguste over the past three decades, died on the afternoon of Fri., May 8, 2020 at the OFATMA Hospital in Port-au-Prince after lapsing into a coma two days earlier.

After a first stroke in 2018, Ti Do suffered a second stroke on Apr. 9, only eight days before So Àn’s death from breast cancer. He returned from the Bernard Mevs Hospital to the Delmas 16 home he had shared with Sò Àn on Apr. 18, the day after her death.

But his condition soon worsened, and his family took him on May 2 to the St. Camille Hospital in La Plaine, until he was later transferred to the OFATMA Hospital.

Some in Haiti would say that Sò Àn “came for him.”

Born on Dec. 28, 1957 at the Chancerelle Hospital in Port-au-Prince to Joseph Lavaud and Livie Pierre-François, Ti Do grew up in Port-au-Prince’s Fontamara 43 neighborhood with his sister, Maryline Lavaud. His parents separated shortly after the childrens’ birth, and Ti Do was raised mostly by his mother.

After going to the capital’s Jean-Jacques Dessalines high school, he studied under the Haitian artist Denis Emile, before helping to found the rasin music group Sa.

But that group was just a precursor to the “vodou jazz” group Foula, in which he was the guitarist and lead singer next to Jean-Raymond Giglio (percussion), Gaston “Bonga” Jean-Baptiste (percussion), “Rasin” (percussion), Yves “Chico” Boyer (bass), Ronald “Aboudja” Derenencourt (percussion), and Thurgot Theodat (sax & percussion).

“He wanted to do something different with vodou,” said Pierre Richard Cajuste, a long-time member of Haiti’s diplomatic service who was a big supporter of Foula. “He really believed in the masses. He was truly a man of the people.”

After the 1991 coup, he fled to New York. Shortly after arriving in Brooklyn, he moved in with a girlfriend, who turned him out of their home on a snowy winter night. A passing Haitian cab driver saw Ti Do struggling with his bags in the snow and stopped to pick him up.

“Don’t you know any other Haitians here in Brooklyn,” the cabbie asked him.

“I know plenty, but the one I know best, of whom you might have heard, is Sò Àn,” Ti Do replied.

“Well, of course, I know Sò Àn,” the cabbie replied. “Let me take you to her house now.”

That was how Ti Do came to live and work with fellow musician Sò Àn, moving into her Brooklyn Avenue home. In the years that followed, he would often be her sole accompaniment on the stage with his guitar.

After returning to Haiti with Sò Àn in 1994, he was often a presence in her tumultuous political life, lurking in the background as she held center-stage. Although soft-spoken and retiring, Ti Do was well-known by many of Haiti’s leading artists, politicians, and journalists.

In his final years, he became a cultural attaché at the National Theatre, giving occasional lectures on the role of music in vodou.

He is survived by his sister, Maryline Lavaud, who lives in the U.S., along with two daughters, Winifrede Lavaud and Lyne Dossa Lavaud. 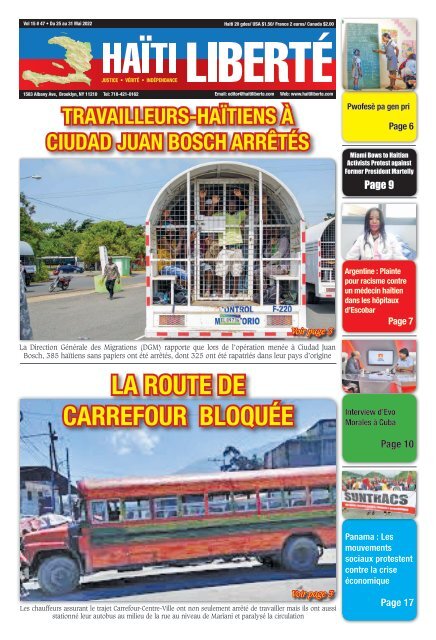