This week, Kenneth Merten, the former U.S. Ambassador (2009-2012) and new Chargé d’Affaires to Haiti, finally reiterated Washington’s position on Jimmy “Barbecue” Cherizier, the spokesman and putative leader of the Revolutionary Forces of the G9 Family and Allies, Mess with One, You Mess with All (FRG9), a federation of armed neighborhood organizations.

“He is a man who is the leader of a gang,” Merten told the daily Le Nouvelliste. “I believe that the United States has already placed sanctions on him. I think that explains what we think of him. I don’t have more to say.”

Indeed, the U.S. Treasury Department placed Magnitsky Sanctions on Cherizier on Dec. 10, 2020, charging that he “planned and participated in the [Nov. 13,] 2018 La Saline attack,” an event that human rights reports have varyingly described as a confrontation between armed gangs or a state-sponsored massacre. “Cherizier is now one of Haiti’s most influential gang leaders,” the Treasury Department continues, claiming that throughout “2018 and 2019, Cherizier led armed groups in coordinated, brutal attacks in Port-au-Prince neighborhoods,” as well as a May 2020 attack “in which civilians were killed and houses were set on fire.”

When pressed by Le Nouvelliste to confirm if Washington wanted the Haitian National Police (PNH) to arrest Cherizier, Merten diplomatically replied: “We always want Haitian laws to be respected.” 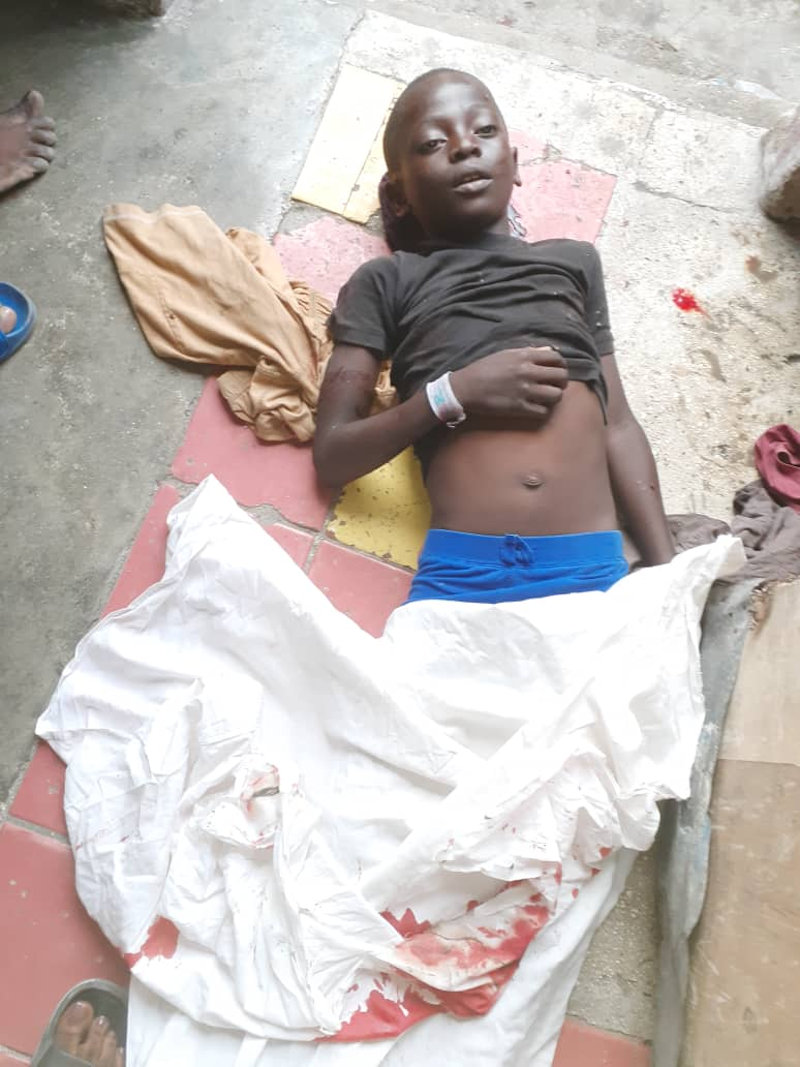 Merten’s statements, published Nov. 5, were really a response to a Nov. 3 open letter in which the FRG9 invited “the United Nations in general and the countries which are so-called friends of Haiti, in particular the United States of America, to register on this page of history as loyal allies who want the well-being of the Haitian people by divorcing from the status quo.”

In short, Merten was telling Cherizier: we were against you, and we are still against you.

This should come as no surprise because Cherizier is

now locked in a life-and-death struggle with Washington-backed Prime Minister Ariel Henry. Over the past four weeks, the FRG9 has blocked fuel trucks from leaving the Varreux Oil Terminal, which is on the Port-au-Prince waterfront, wedged between two miserable slums, Wharf Jérémie and Cité Soleil, which the federation controls. The FRG9 says that it will lift Varreux’s blockage when Ariel Henry steps down and faces prosecution for allegations that he was involved in the Jul. 7, 2021 machine-gun murder of President Jovenel Moïse. Phone records indicate that he spoke many times before and twice immediately after the assassination to former government official Joseph Felix Badio, who, authorities claim, ordered (by telephone) the triggermen to shoot. Henry claims he has no memory of the calls.

On Oct. 17, the anniversary of founding father Jean-Jacques Dessalines’ 1806 murder, Cherizier humiliated Henry by sending his official delegation and the police running from the monument where a ceremony was to take place in the Pont Rouge neighborhood. Cherizier ended up leading a march there and laying the commemorative wreaths before Dessalines’ giant portrait rather than the Prime Minister.

As a result, Police Chief Léon Charles was fired (returning to his post as Haiti’s Ambassador to the Organization of American States in Washington, DC) and replaced by Inspector General Frantz Elbé.

“We’ve been under attack for about three days now”

That symbolic victory won the FRG9 a great deal of popular admiration, but the current tactic of holding Haiti’s gas supply hostage has been much more controversial. Haiti’s poor, the FRG9’s constituency, has been the hardest hit by the gas drought, which has quadrupled fuel prices to as much as $20 a gallon, crippling hospitals, stoking inflation, silencing radio stations, and thinning the hoards of motorbike taxis which are one of the principal lines of work in Haiti’s shantytowns.

On Mon., Nov. 8, fierce fighting erupted in lower Delmas and the areas around the Varreux Terminal as specialized PNH units in armored vehicles launched an offensive to open a corridor for the fuel trucks to pass.

“The attempt yesterday of the Coordinator of Palace Security [Vladimir Paraison] to take control of the Varreux facility was in vain,” reported the online site Lavi Info on Nov. 9, saying that “the operation failed piteously” and due to “being unplanned…, psychological non-preparation of agents of different specialized units, armored cars which broke down, a lack of ammunition, a deficit in the communication system…, blind assault…, shooting in all directions…” all of which resulted in “yesterday’s failure and the withdrawal of troops, very late in the evening of Mon., Nov. 8, 2021.”

But even fiercer fighting resumed on Nov. 9. In the morning, police gunfire killed a 10-year-old boy, Cherizier told Haiti Liberté. The wound appeared to be in the back of the head and occurred at the former-prison-turned-housing Fort Dimanche, which is right next to the Varreux Terminal. Cherizier said the boy’s funeral will be held on Fri., Nov. 12.

“We’ve been under attack for about three days now,” said Mario Brunache, 68, a Vietnam veteran and retired U.S. postal worker who lives in Delmas 6, Cherizier’s neighborhood. He said that the CIMO – a specialized PNH unit – came in an armored car and police cruiser (called a zo reken or shark bone), knocked down the barricade blocking the entrance to the neighborhood from the Delmas Road, and then fired tear-gas and bullets from the vehicles. “They have an armored car sitting at the entrance to Delmas 6 right now.”

CIMO units also fired at school kids leaving a school in Delmas 4 on Nov. 9, but there were no wounded, Brunache said.

“Instead of going after Izo [the head of a kidnapping gang in the Village de Dieu neighborhood] or the 400 Mawozo [a Croix-des-Bouquets-based gang which is holding 17 North American missionaries hostage for a ransom of $17 million], they want Jimmy,” Brunache concluded.

Meanwhile, resigned U.S. Envoy to Haiti Daniel Foote made the rounds on major news networks to push for U.S. military intervention to help the Haitian cops. “I proposed sending a company or so of U.S. special forces to train an anti-gang task force in the Haitian National Police,” Foote told CBS News on Nov. 5. He repeated the same formula in an MSNBC interview on Nov. 8, where he again proposed that 30 to 60 elite U.S. soldier help with the “training, advising, equipping, and assisting” of the PNH “to take on this terrible gang problem that they have.”

On Oct. 31, the editorial board of the Washington Post issued its fifth call – yes, fifth – for U.S. military intervention in Haiti, arguing the following: “Gangs led by strongmen might continue to fill the power vacuum. One particularly powerful warlord, openly maneuvering to seize power, is promoting pandemonium and halting fuel supplies in hopes of toppling the government. Whether he succeeds or fails, neither scenario provides a blueprint for restoring order, or the provision of food and medical supplies in a spiraling humanitarian crisis.”

The editorial concludes by saying that on July 7, “the Post editorial board called for international intervention to prevent what we saw as a foreseeable emergency. That emergency has now arrived…”

In an effort to rally popular support for the Varreux blockage, Cherizier tweeted a message to “the Haitian people” on Nov. 9: “We are conscious of the difficult situation you are going through, but this battle is your battle, it is the Haitian people’s battle to get real change.”

Whether the poor Haitian masses, where Cherizier’s message of justice, equality, and services for shantytown residents has resonated, will tolerate the gas crisis much longer remains to be seen. They are acutely aware, as Cherizier has repeatedly pointed out, that the Haitian bourgeoisie has large private gas reservoirs to draw on so are not feeling the pain. This deepens the resentment of many against the “5% which control 85% of Haiti’s wealth,” a Cherizier refrain.

But this is a critical test of the FRG9’s support among Haiti’s most impoverished, who are experiencing unprecedented depths of hunger and misery. Cherizier and his allies come from their ranks, however, and may be able to gauge their limits. The FRG9 says that now is the historical moment for a revolution to break Haiti’s descent into abysmal poverty and intractable political dysfunction.

This past weekend, Cherizier, whether trying to exhort the masses or steel his own determination, replaced the smiling selfie on his Whatsapp profile with a picture and quotation of Che Guevara: “Whoever does not have the courage to rebel, does not have the right to lament.”