Follow the money, says the old adage of investigative journalism. A crusading Dominican journalist did just that with dozens of financial documents from some Dominican construction firms and uncovered shocking results.

Over the course of 2011, Michel Joseph Martelly, as a candidate, president-elect, and president of Haiti, received close to $2.6 million in over a dozen payments from a Dominican Senator named Félix Bautista, according to an explosive Mar. 31 television report by star Dominican journalist Nuria Piera. 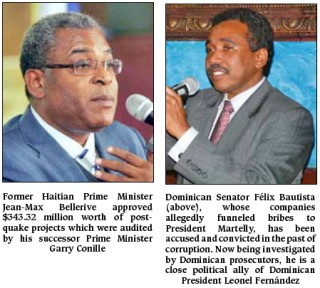 The allegations come when President Martelly is already besieged by a Haitian Senate investigation into whether he and his Prime Minister nominee, Laurent Lamothe, may hold or have held dual citizenship, which is prohibited by Haitian law.

If Nuria’s charges prove true, wholly or even partially, they may deal a mortal blow to Martelly’s presidency. Already, Deputy Arnel Belizaire, who was illegally arrested last November on Martelly’s orders, says he is close to calling for the convening of Parliament’s High Court of Justice to impeach the President. Another deputy, Tholbert Alexis, told Scoop FM that he would push for a special commission to look into Nuria Piera’s allegations.

However, the contracts, approved on Nov. 8, 2010 by former Prime Minister Jean-Max Bellerive, were the target of an audit by Martelly’s Prime Minister Garry Conille, who was forced on Martelly by Washington in October 2011. Martelly forced Conille to resign in February 2012 after the prime minister refused to call off the audit of those three contracts (and 38 others with Dominican companies) as the president had ordered.

Several payments to Martelly allegedly came from the bank accounts of two Bautista-owned firms which have won major contracts in Haiti.

Rumors have swirled around Haiti and its diaspora for weeks that Conille was fired for undertaking the audit and that it contained information damaging to both Bellerive and Martelly. But in an Apr. 3 note from Martelly’s Communications office, the president claimed that he was the one who insisted on the audit “which he would never have demanded if he was colluding with the beneficiaries of these contracts considered dubious by his government.”

President Martelly has denied Nuria Piera’s charges in Tweets he sent out at about 7 p.m. on Apr. 2. “The Presidency of the Republic categorically rejects the allegations that the President of the Republic, HE Mr. Michel Joseph Martelly, has been involved in any corruption case involving firms or individuals from the Dominican Republic,” Martelly wrote via Twitter, calling Piera’s report “accusations that are fantasies and unjustly made against the head of state” which “are part of a larger campaign to poison public opinion and to smear the image of President Martelly and undermine his integrity.”

Martelly’s Tweets concluded by saying “this attack waged against the head of state is part of a campaign trying to obstruct the policy of change and modernization of the state that the President of the Republic is beginning to establish in the country.”

Piera also said that Mirlande Manigat, Martelly’s opponent in the Mar. 20, 2011 presidential run-off, received a cash payment of $250,000 on Feb. 18, 2011. The head of Manigat’s campaign, Sen. Youri Latortue, claimed that he knew nothing about the payment. Manigat also denied that she or her campaign had received any such money. “They say that this is a credible journalist, but she was wrong,” Manigat said.

Last week, in a response to an article in Haïti Liberté, Bellerive also denounced criticism of the contracts as “an obviously sponsored press campaign” (he did not say by whom) and a “media lynching,” arguing that “due to their geographical proximity, Dominican firms were in good position to win contracts.”

However, a highly placed Dominican Republic-based source who provided Haïti Liberté with the bids and contracts was outraged. “The closed bid with three companies belonging to the same person is a nightmare,” he said, venturing the following analysis. “I believe that Uncle Sam was concerned that the scandal was so great and obvious that it could discourage international donors to give more money to the country… Bellerive was sloppy… The PM [Conille] at first was not going for a witch-hunt but was simply trying to annul those contracts to redo them. I don’t think he was prepared to endorse this disaster. But the President took offense at his investigation.”

The contracts were approved in November 2011 by a committee: Michel Content, Lionel Grand’pierre, and Hervey Day. All three are close associates of Bellerive. Day, who headed the committee, is Bellerive’s cousin. Later, Day would be named by President Martelly as the Planning Minister, a post also held by Bellerive while he was the Prime Minister. Conille had also wanted to hold the Planning Minister’s post but was denied it by Martelly. The post is key since the Planning Minister handles most of the reconstruction contracts.

“It’s true that Félix Bautista presented us with several Dominican companies because we asked Leonel Fernández to help us find companies willing to work right away — even without advance payment,” Bellerive told the Miami Herald, adding that he “did not know [Bautista] was owner of shares in those different companies.”

The Dominican Republic’s National Directorate of Prosecution of Administrative Corruption told the Herald that it was now investigating Bautista, who represents San Juan de la Maguana, for corruption.

Piera’s report also pointed to apparent bribes being paid to many high-ranking officials in the PLD and the Dominican government.

The report also said that Sen. Bautista is fabulously rich, owning about $10.44 million worth of real estate around the DR.

Bautista has also denied any wrong doing but has a very checkered past. In 2000, he was jailed for corruption and mismanagement of government funds, and was charged with the same in 2007. He has also been under investigation for links to the notorious Puerto Rican drug lord Figueroa Agosto.

Piera alleges that the payments made by Bautista’s companies to Michel Martelly were as follows:

The total amount transferred by Bautista-controlled companies to Martelly in 2011 was $2,587,100, according “only to the reports that we have in our possession,” reported Nuria Piera, suggesting that there may have been even more kickbacks.  Her program “Nuria Investigacion” is said to be the Dominican Republic’s highest-rated television show.