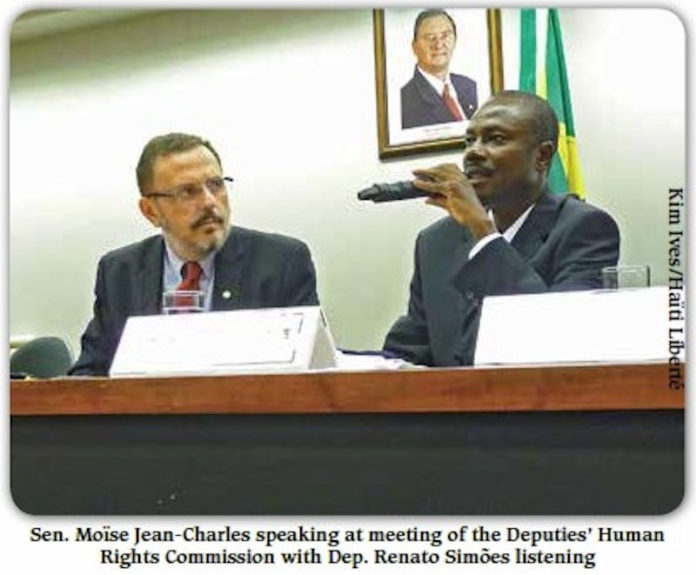 The Human Rights Commission of the Brazilian Senate voted unanimously last week for the withdrawal of Brazilian troops from the UN Mission to Stabilize Haiti (MINUSTAH), which was deployed 10 years ago on Jun. 1.

The resolution, made by Senators Ana Rita , Eduardo Suplicy, and Wellington Dias, all of the ruling Workers Party (PT), calls for “Brazil to lead the countries of Latin American in withdrawing troops” from the force of about 6,600 soldiers and police officers.

Brazil’s generals have led MINUSTAH since its deployment following the Feb. 29, 2004 coup d’état, which the U.S., France, and Canada orchestrated against the elected government of President Jean-Bertrand Aristide. Brazil has always had the largest contingent of troops – about 2,200 – in the UN force. 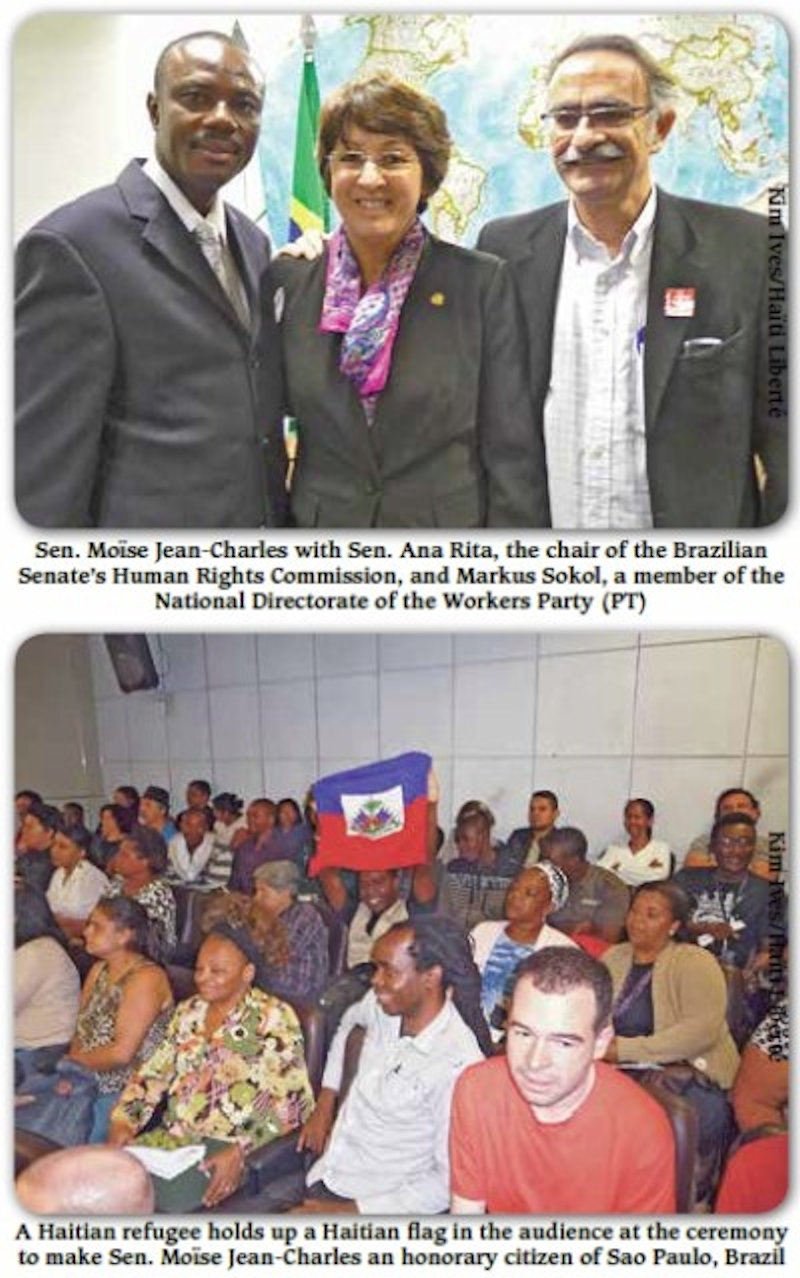 The vote came after the commission received Haitian Sen. Moïse Jean-Charles in Brasilia on May 21. “Haiti is not at war, and there is no civil war either,” said Sen. Jean-Charles, who spent six-days in the capital and Sao Paulo. “Our struggle for the withdrawal of the UN military occupation from Haiti is a part of the struggle of brethren peoples across Latin America and the world against imperialist forces seeking to use the UN to advance their agenda in Haiti and trample our sovereignty.”

Sen. Jean-Charles also presented the Brazilian senators with the text of the May 28, 2013 Haitian Senate resolution, passed unanimously, which called for all UN troops to leave Haiti by May 28, 2014.

Later on May 21, Sen. Jean-Charles spoke to the Human Rights Commission of the Brazilian Chamber of Deputies. PT Deputies Fernando Ferro and Renato Simões asked the Haitian senator many questions and in the end also pledged their support for the withdrawal of Brazilian troops from MINUSTAH.

Both commissions said they will seek to pass a resolution calling for Brazil’s withdrawal from MINUSTAH in both houses of Parliament in October.

During his time in Brasilia, Sen. Jean-Charles also met with Defense Minister Celso Amorim and was presented before a Senate plenary session by Sens. Ana Rita and Eduardo Suplicy.

On May 22, Sen. Jean-Charles returned to Sao Paulo to be named an “honorary citizen” of that city, the Western Hemisphere’s largest with 18 million inhabitants.

Initiated by City Councilwoman Juliana Cardoso (PT), the ceremony was held before a room crammed full with over 100 people, including over a dozen Haitian refugees. Among the many speakers were Deputies Adriano Diogo and Renato Simões (PT); José Américo Días, the president of the Sao Paulo City Council; João Gomes of the CUT, Brazil’s largest union; Milton Barbosa of the United Black Movement; and Markus Sokol, a member of the PT’s National Directorate. At least five highly influential members of the PT’s national leadership were present.

“Please, Ms. President, this is not a peace-keeping force,” Dep. Diogo said in a much applauded speech. “It is a war-making force. Bring it home.”

“Our visit to Brazil showed clearly that the Brazilian people are in solidarity with the Haitian people’s call for the UN troops to leave Haiti.”

Brazil’s Ambassador in Haiti and Haiti’s Consul General in Sao Paulo had called the City Council in an effort to have the ceremony honoring Sen. Jean-Charles cancelled, Councilwoman Cardoso told the audience. “They asked why we were giving the honor of Sao Paulo citizenship to a Senator who is so critical of the Haitian government that it is in danger of falling,” Ms. Cardoso told the packed and cheering hall. “The presence of all of you here tonight, especially our Haitian brothers and sisters, is the response to that question.”

Sen. Jean-Charles spoke after being awarded a large citizenship certificate. “In 2004, troops were sent to Haiti with the promise of stabilizing the country in six months,” he told the crowd. “Now they have been there a decade, and things have not gotten better, but worse. It would be better to send tractors rather than tanks. The UN troops are only there to ensure the exploitation of Haiti’s resources by our oligarchy and multinational monopolies. The occupation removes our right to self-determination and to have an independent and sovereign nation.”

Following the ceremony, the Haitians and others in the audience spent over an hour talking to and taking pictures with Sen. Jean-Charles.

The senators’s tour in Brazil was largely organized and facilitated by O Trabalho (The Work), an influential anti-imperialist current in the PT.

“Our visit to Brazil showed clearly that the Brazilian people are in solidarity with the Haitian people’s call for the UN troops to leave Haiti,” said Oxygène David, a leader of the Dessalines Coordination (KOD) political party, who traveled in Sen. Jean-Charles’ delegation along with a journalist from Haïti Liberté. “Thanks to the senator’s three visits here over the past year and the solidarity of growing numbers of Brazilian comrades in the PT, the Brazilian people are forcing their elected leaders to demand the withdrawal of UN troops in Haiti and bringing an end to this shameful chapter in Haitian and Latin American history.