On Jan. 12, 2010 at 4:53 p.m. Eastern time, the northern Caribbean’s most powerful earthquake in decades, measuring 7.3 magnitude, struck 10 miles southwest of Haiti’s capital, Port-au-Prince, causing catastrophic damage by collapsing office buildings, roads, schools, hospitals, hotels, and thousands of fl imsy houses precariously built on steep mountainsides. The first quake was followed by many aftershocks, including two of 5.5 and another of 5.9 magnitude. 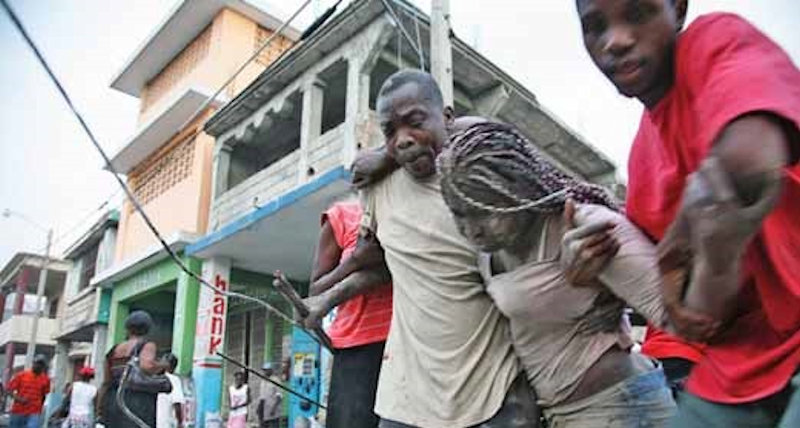 Earthquake magnitude grows exponentially. A magnitude 7 earthquake is 10 times more powerful than a magnitude 6 and 100 times more powerful than a magnitude 5. Individuals calling into a Haitian internet television Vision Nouvelle reported dozens of deaths from houses collapsing onto other houses, burying people inside. Those who had reached their family in Port-au- Prince by phone reported a situation of chaos with a total power outage blanketing the capital and the wails of the wounded and mourning filling the damp night air. Fires burned in many parts of the capital. Grey dust-covered bleeding people wandered around like ghosts. 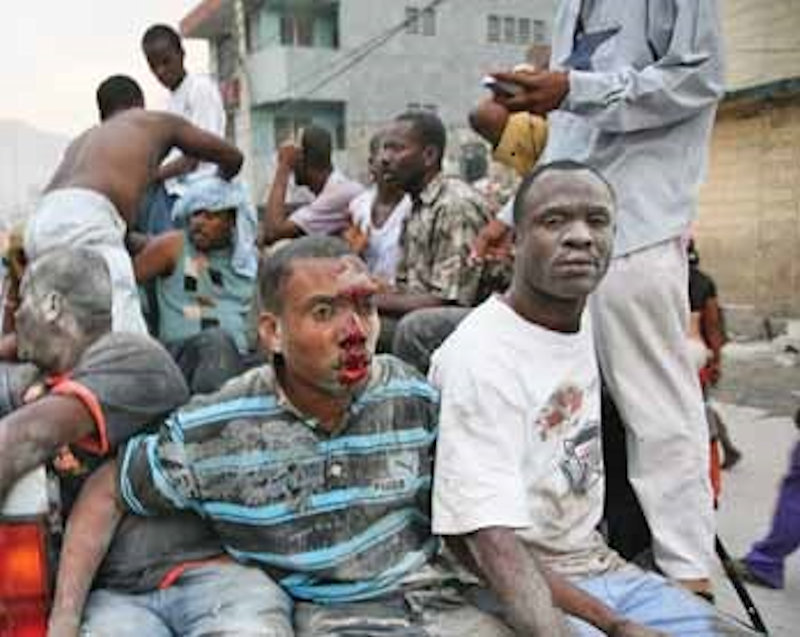 Early reports suggest that many hundreds of houses collapsed, likely causing thousands of casualties. Giant traffic jams filled impassible roads. A U.S. official told the AP that the air over the capital was “just grey with dust” following the quake, likely caused by collapsing structures. Hundreds of panicked and crying people ran through the debris-filled streets looking for loved ones or seeking to transport wounded family or friends to hospitals. 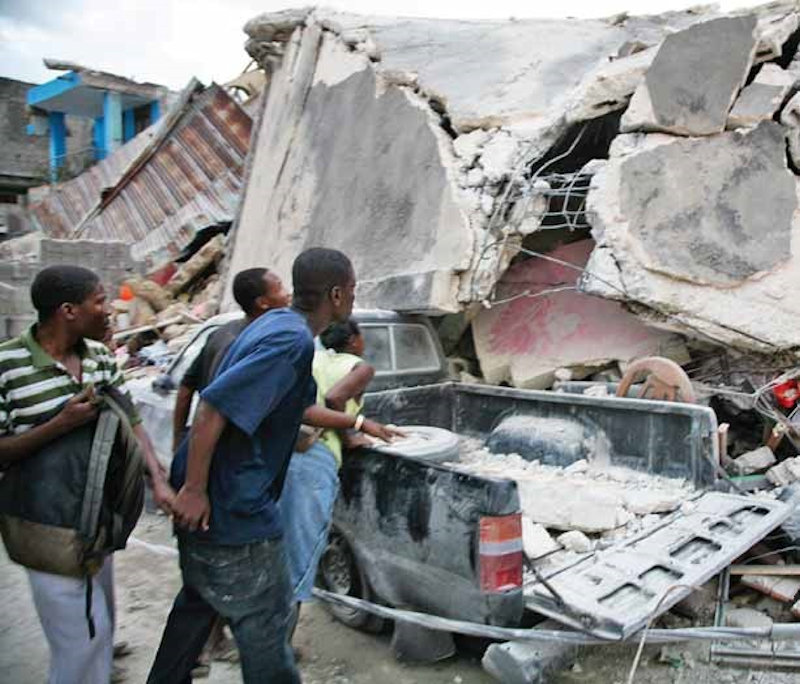 At press time, it was still almost impossible to reach phones in Port-au-Prince and most cell phone service in the capital is inoperable, but the few calls that have gotten through describe a scene of total confusion, panic and despair. Looting was reported in some areas. In 1946, two earthquakes of magnitudes 7.6 and 8 struck offshore near Samana, Dominican Republic. Today’s earthquake in Haiti had a depth below the surface of 6.2 miles, which is considered shallow. The shallower an earthquake, the more destructive.

The first quake was followed by many aftershocks, including two of 5.5 and another of 5.9 magnitude.

Rural communities around the capital were also hard-hit. A report from Léogane said that many homes had fallen down and hundreds of people there had taken refuge in a small soccer stadium. The south-eastern city of Jacmel is also reported to have sustained major damage. A UN source reports that the UN regional office in Panama is communicating with Port-au-Prince via satellite phone and that the airport is closed. All flights on Thursday, Jan. 13 are cancelled, and all commercial flights in the days after that are booked solid.

The Presidential Palace collapsed along its entire length as well as the nearby General Hospital. The roof of the National Cathedral caved in as a nearby building burned, BBC footage showed. An unconfirmed report by a witness on Television Vision Nouvelle said the Palace of Justice, Haiti’s Supreme Court, had completely collapsed. Reports suggest that some of the hardest-hit areas include Delmas, Carrefour, Pétionville, and Carrefour Feuilles. 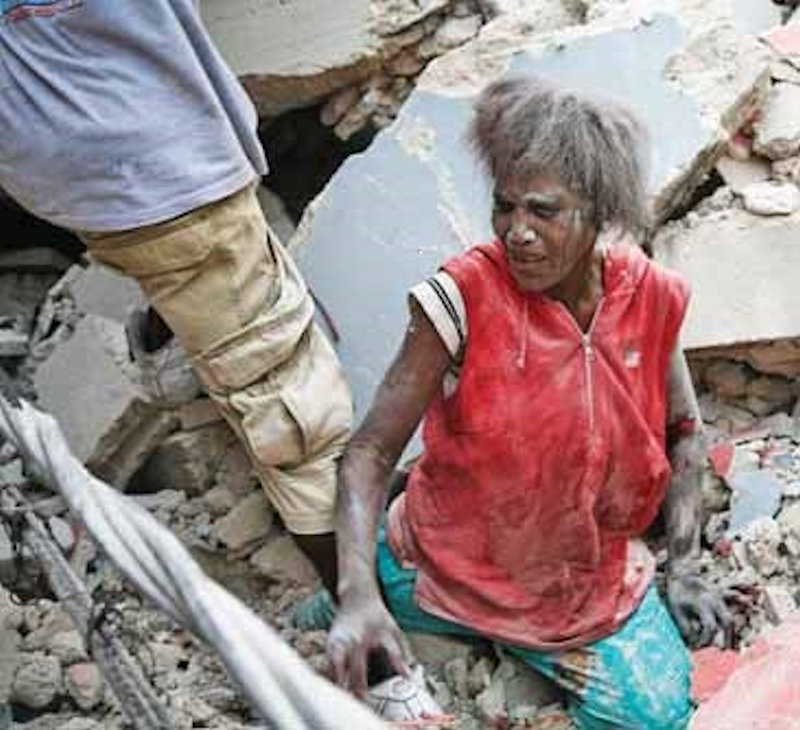 By Twitter, Richard Morse, the manager of the Oloffson Hotel near the capital’s Carrefour Feuilles neighborhood reported that the Hotel Christopher, which houses the headquarters of the U.N. Mission to Stabilize Haiti (MINUSTAH), and the Hotel Montana, one of Pétionville’s most luxurious mountaintop hotels, “are flattened” according to “an eye-witness.” He also reported that the 8-story Castel d’Haïti, an vacant hotel that dominated the hill behind the Oloffson, was “a pile of rubble.”

Many homes in the hilly neighborhood of Delmas 75 are said to have collapsed, witnesses told Television Vision Nouvelle. In the five hours immediately following the quake, there had been no public declarations by high Haitian officials. U.S. President Obama said his “prayers are with the Haitian people” and vowed to send aid. This natural disaster comes just a year and four months after four powerful storms struck Haiti in September 2008, causing about 1000 deaths, leaving hundreds of thousands homeless, and causing an estimated $1 billion in damages to infrastructure and agriculture.