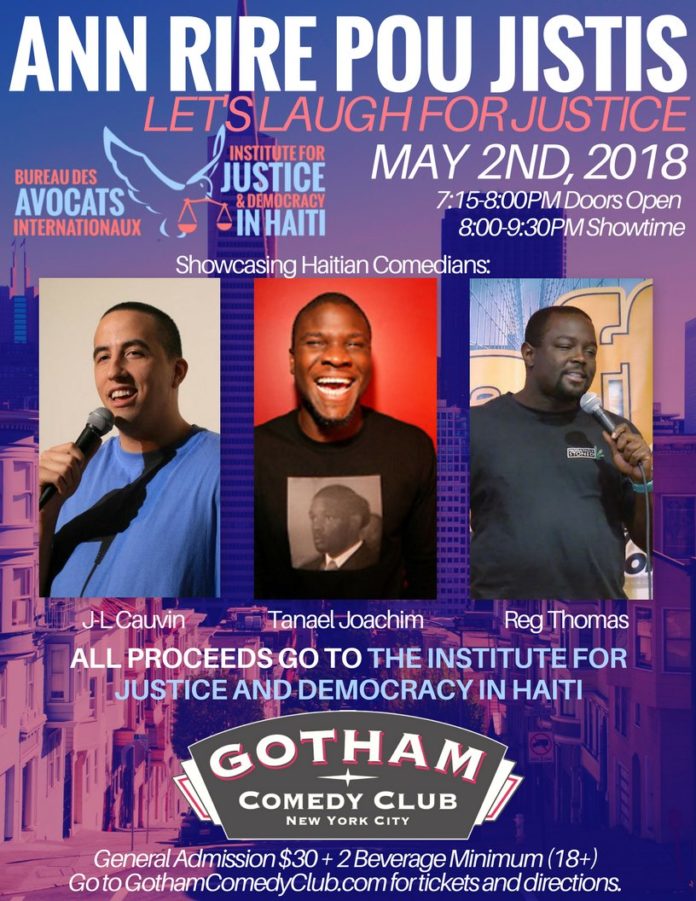 On May 2nd at the Gotham Comedy Club in New York, Haitian comedians Jean-Louis Cauvin, Tanael Joachim, and Reginal “Reg” Thomas will make you laugh until you cry. But they will also tell you about the work of the Bureau des Avocats Internationaux (BAI) and Institute for Justice & Democracy in Haiti (IJDH), two organizations that have been at the forefront of fighting for justice for victims of Haiti’s cholera epidemic introduced into Haiti by United Nations (UN) soldiers seven years ago. They seek to hold the UN accountable for its inaction in preventing the spread of this deadly disease, which has killed 10,000 Haitians and sickened one million.

Tanael Joachim, a native of Haiti, is one of the three comedians performing to support the BAI & the IJDH’s advocacy and legal work in Haiti. “Anything that has to do with Haiti, I am happy to support,” he said. “This is in my blood.”

Joachim is urging others to join him and other comedians in support of IJDH’s crucial advocacy work, especially that on behalf of tens of thousands of Haitian who are currently living under Temporary Protected Status (TPS) scheduled to expire in July 2019.

“When you come to this show, all the proceeds are going to a cause that will help defend the lives of tens of thousands of Haitians,” said Joachim referring to Haitian TPS recipients.

Headlining the show is Jean-Louis Cauvin, a lawyer-turned-comedian born to an Irish-American mother and a Haitian father. He appealed to residents of the New York City metropolitan area to come out and laugh while championing a noble cause.

“The good news is that the audience will have a hilarious comedy show,” he said. “It won’t feel like charity work. Folks will be entertained while their tickets go to a worthy cause.”

For 23 years, the BAI and IJDH have kept activists safe, rallied global allies in the fight for human rights in Haiti, and pressured Haiti’s justice system to serve marginalized victims of rape and other crimes. They also helped force UN Secretary General Ban Ki-moon to make an unprecedented apology to the Haitian people about the UN’s cholera response in Haiti, and to promise a $400 million response plan. Both BAI and IJDH believe in using all mechanisms that are available to promote justice and democracy in Haiti.

“For example, in the cholera case, we filed a lawsuit against the United Nations in a U.S. court, and we organized demonstrations in Port-Au-Prince, Mirebalais, New York, and Geneva,” said IJDH’s Executive Director Brian E. Concannon Jr. “The May 2nd event in New York’s Chelsea neighborhood is an advocacy opportunity too. We will gather people who care about justice to laugh, of course, but also to learn and discuss how we can all stand up for justice and democracy in Haiti.”