The release of secret U.S. Embassy cables has provoked a maelstrom in Haitian politics, threatening the approval of a prime minister-designate, damaging the career of a leading right-wing politician, and throwing Haiti’s tiny and ultra-rich elite into a paroxysm of public mea culpas.

“So it is with humility and simplicity devoid of artifice that I want to offer you my sincerest apologies,” wrote Fritz Mevs, the leader of one of Haiti’s richest families, in an open letter to Senator Youri Latortue, one of Haiti’s most powerful right-wing politicians and a key ally of new Haitian President Michel Martelly.

“I recognize in you the qualities of a fervent patriot, a tireless servant of your country’s interests. I stand ready to make honorable amends by publicly correcting any damage to your reputation,” he added.

Mevs was walking back charges he made in a May 2005 meeting with former U.S. Ambassador James Foley that Senator Latortue was part of a “cabal” of business and political elites that controlled a network of dirty cops and gangs engaged in narco-trafficking and kidnapping, generating political violence and instability.

Mevs’ apology came the same week that a further batch of State Department cables released by the weekly newspaper Haïti Liberté described Youri Latortue as a “mafia boss,” “drug dealer” and the “the most brazenly corrupt of leading Haitian politicians.”

Latortue denies the allegations and has threatened a lawsuit against Haïti Liberté.

Meanwhile, parliamentary approval for President Michel Martelly’s pick for prime minister, Bernard Gousse, took a major blow with the publication of secret U.S. Embassy reports that he was a “complete failure both on the security and justice fronts” when he served as Justice Minister under the de facto coup government that followed the overthrow of President Jean-Bertrand Aristide in February 2004. 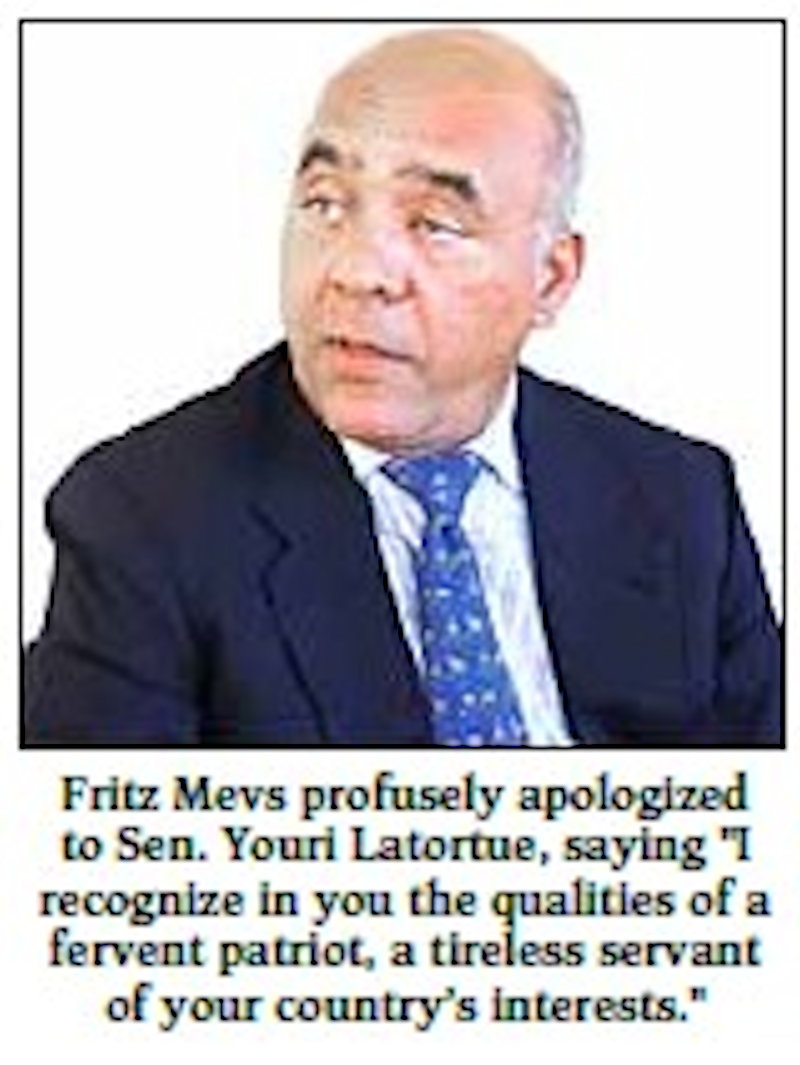 During his tenure, Gousse presided over repeated police and paramilitary assaults on suspected pro-Aristide neighborhoods and supporters, killing and jailing thousands of people.

The UN occupation chief at that time, Juan Gabriel Valdès, felt that “replacing Gousse would be a good thing for both justice and security in Haiti,” reported Ambassador Foley in a May 2005 cable.

“Gousse has been the strongest single force behind the persecution of political prisoners in Haiti,” said the Brian Concannon, director of the Institute for Justice and Democracy (IJDH) in Haiti.

When former dictator Jean-Claude Duvalier, currently under investigation and house arrest, returned to Haiti in January this year, Gousse argued against his prosecution in an op-ed for the Haitian daily newspaper Le Nouvelliste. As Justice Minister, Gousse commended right-wing death-squad leader and U.S. Defense Intelligence Agency (DIA) asset Louis Jodel Chamblain for his “great service to the nation” and suggested he could be pardoned.

“As an official in 2004 and more recently as an independent  lawyer, Gousse has shown a troubling disregard for Haiti’s obligation to prosecute human rights crimes,” Amanda Klasing, an expert on Haiti for Human Rights Watch, told Haïti Liberté.

Already, 16 of 30 Haitian Senators have written to President Martelly asking for him to rescind the nomination. The Senators said in a resolution that Gousse was unacceptable for the “repression, arbitrary arrests and killings in the neighborhoods of Port-au-Prince” that were carried out under his auspices in 2004 and 2005.

In early June, Haïti Liberté began releasing articles based on  the trove of 1,918 secret U.S. Embassy cables that WikiLeaks made available to the Haitian weekly newspaper.

The revelations over the last month have focused on Washington’s  dominant role in Haitian political and economic life, including efforts by the U.S. Embassy to scuttle a preferential oil deal with Venezuela and to block a minimum wage increase.

The cables also show how the U.S., UN and E.U. moved ahead with fraudulent presidential and parliamentary election process because they had “too much invested” in Haiti The secret cables showed that Washington sought the cover of elections to maintain international support for the seven-year-old military occupation of Haiti by 9,000 Brazilian-led U.N. troops.

The discredited election process resulted in the election of neo-Duvalierist Michel Martelly, who assumed the presidency in May of this year.

The publication of the cable sparked an extraordinary second mea culpa signed by the other brothers of the Mevs family.

In a May 2005 cable, Ambassador Foley reported on efforts by the small Haitian elite to turn the Haitian National Police (HNP) into their own private army by arming and supplying the fledgling force.

Haiti’s private sector elite has been a key U.S. ally in promoting Washington’s agenda in the country, from free-trade and privatization of state enterprises to twice ousting Jean-Bertrand Aristide followed by U.S. and U.N. military occupations.

Haitian businessman Fritz Mevs was one of the main sources for the “private army” allegation.

Mevs told the Embassy that the president of the Haitian Chamber of Commerce, Reginald Boulos, had “distributed arms to the police and had called on others to do so in order to provide cover to his own actions.” Boulos currently sits on the board of President Bill Clinton’s Interim Haiti Recovery Commission (IHRC), which controls the spending of billions donated to rebuild Haiti after the January 12, 2010 quake.

Mevs told Ambassador Foley that “Haiti’s real enemy and the true source of insecurity [was] a small nexus of drug-dealers and political insiders that control a network of dirty cops and gangs that not only were responsible for committing the kidnappings and murders, but were also frustrating the efforts of well-meaning government officials and the international community to confront them.”

At the center of this cabal, according to Mevs, was prominent attorney Gary Lissade, formerly a lead counsel for the military government of Gen. Raoul Cedras in the early 1990s. Today, Lissade sits, alongside Reginald Boulos, on the board of the Clinton co-chaired IHRC.

Foley wrote that although his Embassy “cannot confirm whether the alleged cabal of political insiders allied with South American narco-traffickers is controlling the gangs, we have seen indications of alliances between drug dealers, criminal gangs and political forces that could threaten to make just such a scenario possible via the election of narco-funded politicians.”

Some political observers fear that this may be the situation in Haiti today.

The publication of the cable sparked an extraordinary second mea culpa signed by the other brothers of the Mevs family. Published in Le Nouvelliste the same day as Fritz Mevs’ letter, the second letter, written ostensibly by family spokesperson Gregory Mevs, said the family makes “a categorical and formal denial of the allegations made in the said article” and “deplores any infringement on the integrity and honor of all individuals directly or indirectly implicated in this article.”

The letter then went on to praise the individuals that had been named by Fritz Mevs as narco-traffickers and kidnappers in Foley’s May 2005 cable.

“Senator Youri Latortue is an honorable man and committed to the advancement of the country. Known for his open-mindedness and vision, his commitment alongside the Haitian people is recognized by all. He is considered one of the most brilliant men of his generation,” said the letter.

“Gary Lissade is one of the best known lawyers in Haiti, enjoying an impeccable reputation. He has engaged himself many times during his career in various initiatives for the good of the community. He is the Mevs family lawyer for over 25 years and continues to be so at this time,” added the letter.

“Dr. Reginald Boulos is an entrepreneur and personal friend of the family. Known for his civic involvement for the private sector, concerned with social and civic responsibilities, he enjoys a reputation as being an honest and dynamic businessman,” said the letter.

The apologies and latest revelations have lit up Haitian radio stations and the blogosphere. Joe Emersberger, one of the editors of the website HaitiAnalysis.com, summed up the episode: “The letter by Fritz Mevs to Youri Latortue reads like a fear-ridden apology to Don Corleone.”