Leading members of Haiti’s bourgeoisie tried to turn the Haitian police force into their own private army, according to a secret U.S. Embassy cable provided to Haïti Liberté by the media organization WikiLeaks.

Then U.S. Ambassador to Haiti James Foley warned in the cable “against private delivery of arms to the HNP” (Haitian National Police) after learning from a prominent Haitian businessman that “some business owners have already begun to purchase weapons and ammunition from the street and distribute them to local police officials in exchange for regular patrols.”

Fritz Mevs, a member of “one of Haiti’s richest families and a well-connected member of the private sector elite” with major business interests in Port-au-Prince’s downtown and port, was the principal source for Foley’s May 27, 2005 report.

Haiti’s “private sector elite” has been a key U.S. ally in promoting Washington’s agenda in the country, from free-trade and privatization of state enterprises to twice ousting Jean-Bertrand Aristide followed by U.S. and UN military occupations.

Mevs told the Embassy that the president of the Haitian Chamber of Commerce, Reginald Boulos, had “distributed arms to the police and had called on others to do so in order to provide cover to his own actions.” Boulos currently sits on the board of Bill Clinton’s Interim Haiti Recovery Commission (IHRC) which controls the spending of $10 billion being donated to rebuild Haiti after the Jan. 12, 2010 quake. 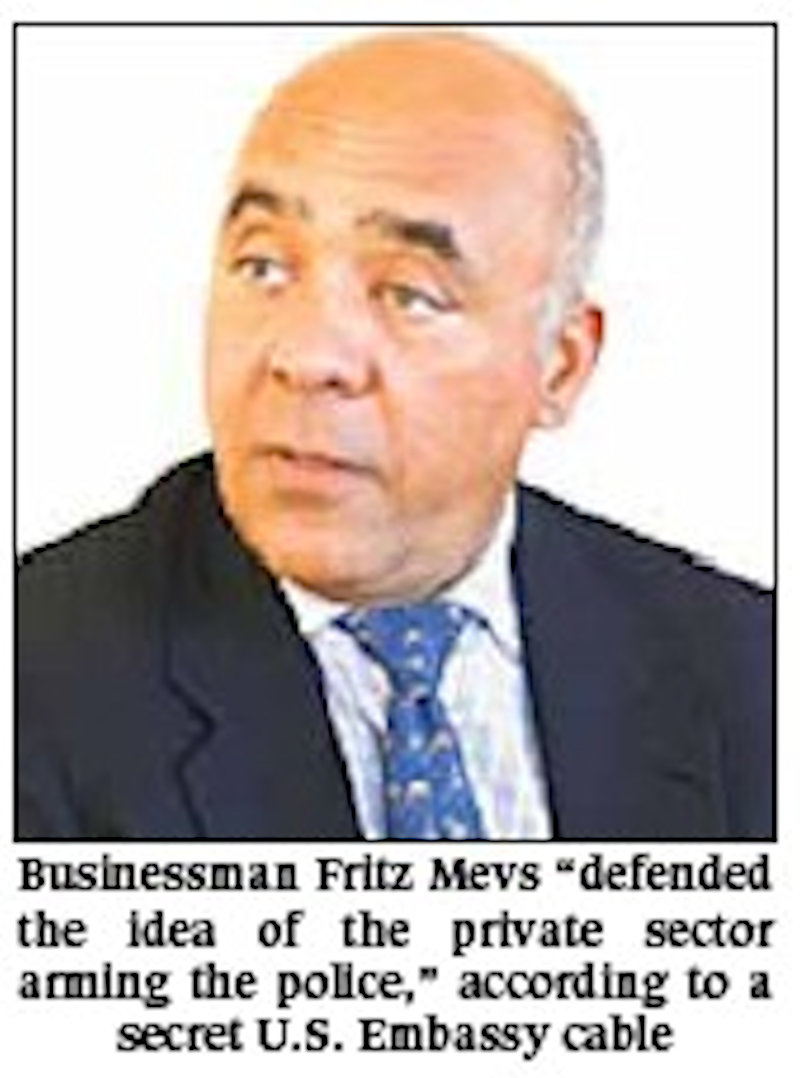 The cable describes the period after the Feb. 29, 2004 coup d’état that ousted Aristide, repressed his Lavalas Family party, set up a US-backed de facto government, and ushered in a 9,000-strong UN military occupation known as MINUSTAH (UN Mission to Stabilize Haiti).

The Latortue regime had particular trouble suppressing pro-Aristide strongholds like the slums of Bel Air and Cité Soleil, which mounted a fierce armed resistance to the coup and occupation. The coup government, US Embassy and Haitian elite called the resistance fighters “bandits” or  “gangs,” the terminology used in the cable.

Entitled “Haitian Private Sector Panicked by Increasing Violence,” the cable relays Mevs report to the Embassy’s Political Officer that Haitian “business leaders are exasperated by the lack of security in the vital port and industrial zone areas of Port-au-Prince and are allegedly arming local police with long-guns and ammunition in an effort to ensure security for their businesses and employees.”

Foley wrote that “Mevs says that of the roughly 150 business owners in the area, probably 30 have already provided some kind of direct assistance (including arms, ammunition, or other materiel) to the police, and the rest are looking to do so soon.”

Mevs “defended the idea of the private sector arming the police in general, but he lamented the haphazard manner in which many of his colleagues seemed to be handing out weapons with little control,” the cable says. Mevs also worried “that funneling the arms secretly would only serve to reinforce rumors that the elite were creating private armies,” which was in fact happening.

Mevs was asking the Embassy if “the U.S. would oversee [a] program” under which the elite could legally buy the HNP’s guns because “he did not trust either MINUSTAH or the HNP to properly control the issuance of weapons.”

The private army “rumor” was corroborated by “[c]ontacts of the Econ Counselor [who] report from time to time of discussions among private sector leaders to fund and arm their own private sector armies.”

Foley added that the “[American Chamber of Commerce] Board of Directors at one point discussed informally giving non-lethal assistance to police stations, such as furniture and microwave ovens for police stations, but decided against doing so for fear that anything given to the police would quickly be stolen.”

Security around the capital’s industrial, warehouse and port districts degenerated after the Mar. 30, 2005 death of Thomas Robenson, alias Labanière, a one-time Lavalas leader in Cité Soleil’s Boston neighborhood, who defected to defense of the 2004 coup and providing armed protection to the bourgeoisie’s nearby commercial zones. Labanière was killed by one of his bodyguards, Evens Jeune, “allegedly in a plot directed by rival pro-Lavalas gang leader Dread Wilme,” Foley wrote.

After that, the UN force had tried to secure the commercial areas but “was proving to be a poor substitute for Labanière,” a political advisor to Cité Soleil’s mayor told the Embassy, largely because “MINUSTAH troops (who, he said, rarely set foot outside of their vehicles) were unable to identify the bandits from amongst the general populace as Labanière had done.”

The residents of Cité Soleil did not view Emmanuel Wilmer (aka Drèd or Dread Wilme) as a “bandit.” They saw him as a hero defending them from pro-coup paramilitaries (who in 1994 burned many houses in the rebellious shantytown) and UN occupation troops. Today, one of the main boulevards through Cité Soleil is named after him, and murals of his face adorn many walls. 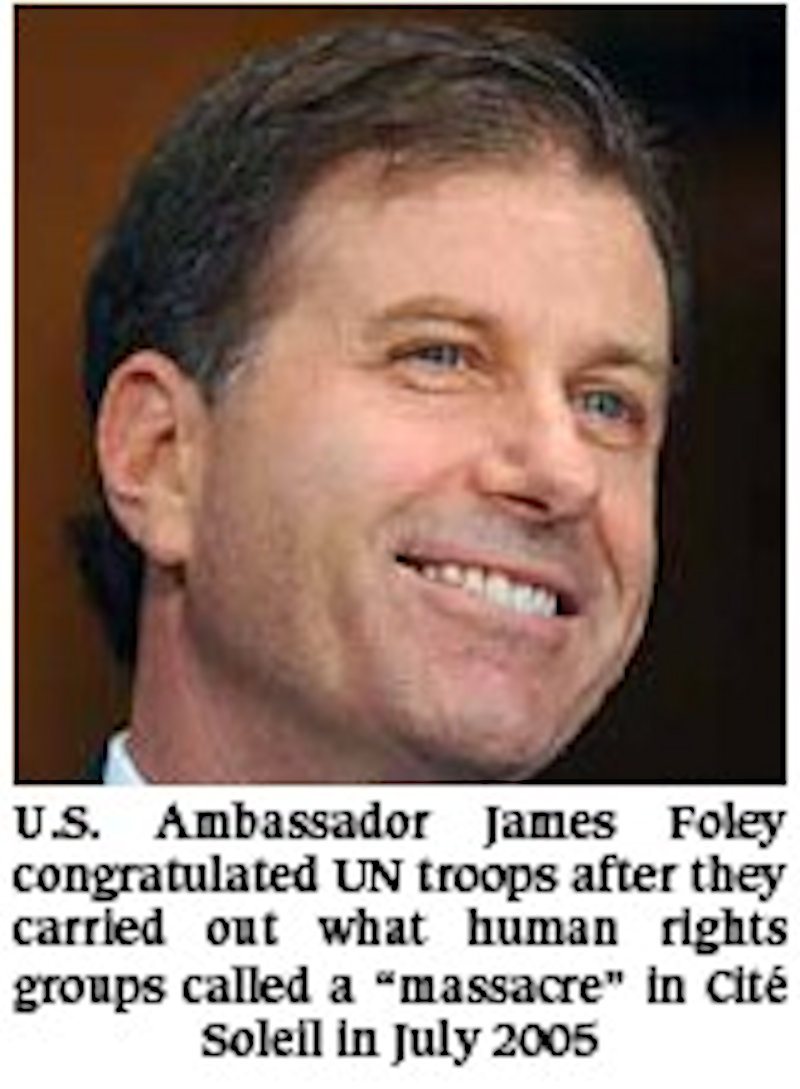 But for Foley and the Haitian elite, the UN military was not doing enough repression. “According to Mevs, although MINUSTAH has on occasion parked armored vehicles near the Terminal with some success, he said criminals regularly force the tanks to move (by burning tires or fecal matter nearby), and as soon as the vehicles depart, the rampage continues.”

Foley asked the “Core Group” of international donors and the UN military for a “swift, aggressive” response to the business sector’s call for action against the “criminal elements” from slums like Cité Soleil.

“Ambassador Foley warned the Core Group that MINUSTAH’s stand-down in Cite Soleil put the elections at risk, and that the insecurity around the industrial zone risked undermining what is left of the Haitian economy,” said the cable.

In response, the UN mission chief Juan Gabriel Valdes “promised a more robust response from MINUSTAH,” which sat down with police leaders to develop a plan in “coordination with the private sector,” the cable explains.

“In response to embassy and private sector prodding, MINUSTAH is now formulating a plan to protect the area,” concluded the cable.

Weeks later, on July 6, 2005, at 3 a.m. in the morning, 1,440 Brazilian and Jordanian soldiers sealed off Cite Soleil with 41 Armored Personnel Carriers and attacked. Helicopters dropped grenades and UN troops fired more than 22,000 bullets, leaving untold dozens of civilian casualties, including women and children. (Cité Soleil residents told an Oct. 2005 fact-finding delegation for the International Tribunal on Haiti that UN tanks whisked away many bodies, which were never returned.) Human rights groups called the carnage a “massacre.”

“It remains unclear how aggressive MINUSTAH was, though 22,000 rounds is a large amount of ammunition to have killed only six people” (the UN’s official death toll), wrote Foley in a Jul. 26, 2005 Embassy cable obtained by Professor Keith Yearman through a FOIA request. The UN claimed it only killed “gang leader Dred Wilme and five of his associates,” the cable says, while noting that “at St. Joseph’s hospital near Cite Soleil, Doctors Without Borders reported receiving 26 gunshot victims from Cite Soleil on July 6, of whom 20 were women and at least one was a child.”

As the evidence of a massacre grew, the UN and U.S. began to admit that more Cité Soleil residents may have died.

Meanwhile journalist Jean Baptiste Jean Ristil, a Cité Soleil resident, interviewed “a weeping Fredi Romélus [who] recounted how UN troops had lobbed a red smoke grenade into his house and then opened fire, killing his wife and two children,” reported the Haiti Information Project.  Jean Ristil also filmed inside the house where the body of Fredi’s 22-year-old wife, Sonia Romélus, lay, “killed by the same bullet that passed through the body of her one-year-old infant son, Nelson,” the HIP reported. “She was apparently holding the child as the UN opened fire. Next to them was her four-year-old son, Stanley, who was killed by a single shot to the head.”

A U.S. Labor and Human Rights Delegation which was in Haiti at the time and visited Cité Soleil the next day reported that “this full-blown military attack on a densely-populated neighborhood… multiple sources confirm killed at least 23 people” and possibly as many as 50.

As the evidence of a massacre grew, the UN and U.S. began to admit that more Cité Soleil residents may have died. “Given the flimsy construction of homes in Cite Soleil and the large quantity of ammunition expended, it is likely that rounds penetrated many buildings, striking unintended targets,” Foley’s FOIA-released cable reported.

By Aug. 1, Foley was praising the Brazilians in another cable (obtained by Yearman’s FOIA requests) entitled “Brazil Shows Backbone in Bel-Air.” According to Foley, “the security situation in the capital has clearly improved thanks to aggressive incursions in Bel Air and the July 6 raid against Dread Wilme in Cite Soleil… Post has congratulated MINUSTAH and the Brazilian Battalion for the remarkable success achieved in recent weeks.”

The WikiLeaked May 2005 cable also offers a glimpse of Haiti’s inter-ruling class rivalries. Mevs felt that “private sector protests against the IGOH for the lack of security were misguided,” Foley reports, because “Haiti’s real enemy and the true source of insecurity [was] a small nexus of drug-dealers and political insiders that control a network of dirty cops and gangs that not only were responsible for committing the kidnappings and murders, but were also frustrating the efforts of well-meaning government officials and the international community to confront them.”

At the center of this “cabal,” according to Mevs, was prominent attorney Gary Lissade, who has a long history as a right-wing operative. In 1993, he was the lead counsel for the military government of coup leader Gen. Raoul Cédras during negotiations at New York’s Governors Island with Aristide’s exiled constitutional government. In 2001, Aristide, in a futile attempt to mollify the Bush administration and putschist bourgeoisie, made Lissade Justice Minister until popular outcry forced his removal along with Prime Minister Jean-Marie Chérestal’s whole government. Today, Lissade sits, alongside Reginald Boulos, on the board of the Clinton co-chaired IHRC.

Others whom Mevs cites in this group allied to “Colombian drug-traffickers” include powerful senator Youri Latortue, a close ally of new Haitian president Michel Martelly, Dany Toussaint, a former Lavalas Family senator who changed camps and supported the 2004 coup against Aristide, and Michel Brunache, who was de facto President Boniface Alexandre’s chief of staff.

The Embassy took Mevs warnings about Lissade’s “cabal” with a grain of salt. Foley wrote that Mevs “is no doubt biased against those individuals he names” because “Mevs himself is a core member of  what might easily be described as a rival network of influence competing for control of Haiti against the cast of characters he has described.” Presciently, Foley says that his Embassy “cannot confirm whether the alleged cabal of political insiders allied with South American narco-traffickers is controlling the gangs, we have seen indications of alliances between drug dealers, criminal gangs and political forces that could threaten to make just such a scenario possible via the election of narco-funded politicians,” which some political observers fear may be the situation in Haiti today.

Meanwhile, Dread Wilme’s legend lives on. “His funeral was a hero’s farewell,” wrote Haitian blogger Erzili Dantò. “His remains decked in a Vodun boat were pushed out onto the open seas next to Site Soley’s water shores, and set to flames for his spirit to soar towards the countless African Ancestors who, like Dread Wilme, had made the ultimate sacrifice for our people’s freedom and dignity.”