Every definable chapter of recent Haitian history seems to have one book which becomes the definitive reference for English speakers. Amy Wilentz’s “The Rainy Season” (1986-1989), Peter Hallward’s “Damming the Flood” (2000-2006), and Jonathan Katz’s “The Big Truck That Went By” (years around the 2010 earthquake) come to mind.

All of those examples, however, were written by foreigners. For the period of the rise and fall of President Michel Martelly (roughly 2010 to 2015), the definitive account at this point is surely “We Have Dared to be Free: Haiti’s Struggle Against Occupation” (News Junkie Post Press, 2015), written by Haitian scientist turned journalist Dady Chery. 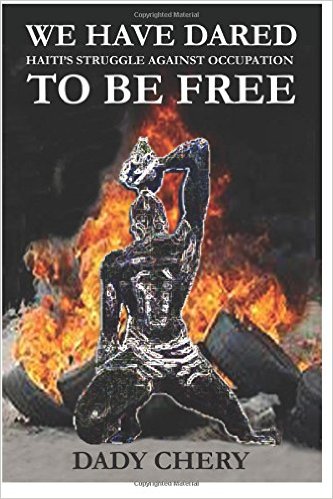 But the book is much more than a recapitulation and analysis of government malfeasance and popular resistance during the years of the recently departed Martelly regime. It is a stirring and unflinching indictment of world capitalism, presented through the prism of the Haitian history, traditions, and culture. It leaps from macro to micro and back, through a patchwork of personal reminiscences, interviews, scientific explanations, and historical accounts which illuminate, not just Haiti, but the state of the world today.

“We can visualize a world where Haiti’s revolution has expanded to all of humanity and become a final push for the birth of all humans into their full potential, and more than anything, into a respect for the other that borders on a religion, with the understanding that we are part of all the life that makes up this era on Earth,” Chery writes in a tour-de-force introduction. “Haiti’s example of the first successful anti-capitalist, anti-imperial, and anti-colonial revolution in a world where slavery was in vogue, showed what humans could do in the face of impossible odds.”

Throughout the book, the author, proud of her “magical childhood” in the Haitian countryside, argues that, in many ways, Haiti offers a model of how the human race can survive in the face of the ecological and economic tsunamis on the horizon. “In addition to a categorical rejection of racism, at the base of all Haitian conduct was also a rejection of slavery: the philosophy that one does not live to work, but one works to earn enough to celebrate life by developing one’s talents,” she writes. “Such an idea is contrary to the capitalist notion of ever growing consumption that follows the failing model of endless economic growth.”

She also lays out the role of the Clintons, particularly Bill Clinton as the co-chair of the Interim Haiti Recovery Commission (IHRC). “From the start, Bill Clinton’s IHRC, an international group of wealthy businessmen, backed by an expanded army from MINUSTAH, forced themselves on the country to make it liquidate its commons to them and their friends at fire-sale prices,” Chery writes. She details the popular resistance to the IHRC and an associated State of Emergency Law “which allowed a takeover of Haiti’s reconstruction efforts formally for 18 months in principle, but really for as long as possible, by a group of wealthy foreign donors who would operate without any liability for their actions.”

Chery is a college biology professor in the U.S., and throughout “We Have Dared to be Free” are detailed scientific presentations on a host of matters: climate change, Haiti’s cholera epidemic and its solution (sanitation, not vaccines), the kidnapping of Haiti’s endangered wildlife species, gold mining, etc.

The structure of the book is unconventional. Rather than the customary recitation of Haitian history at the book’s beginning, Chery places her detailed treatment of key episodes in Haiti’s story towards the middle and the end. Chapter 11 gives an in-depth explanation of rebel leader Charlemagne Péralte and the Caco guerillas who fought the 1915-1934 U.S. Marine occupation of Haiti, and Chapter 21 (of 23 total) gives a similarly detailed account and analysis of Toussaint L’Ouverture, the leader of the successful slave revolution in the colony of St. Domingue.

Chery also slaughters many sacred cows. I particularly liked her spirited defense of the institution of restavek, which is often presented by North American liberals as child slavery. “One cannot talk about orphaned Haitian children without confronting two highly controversial and interwoven subjects: Vodou and restavek,” Chery writes. “Both are part of the very fabric of the Haitian family, which is currently under vicious attack.”

Chery’s mother had been a restavek in her grandparents’ home, and she relates many anecdotes to argue that the “restavek system is profoundly subversive in that it intimately binds Haitians of different socioeconomic classes.”

Similarly, the author makes a clear explanation and strong defense of vodou: “The practices of Haitian Vodou represent religion, unadulterated, unappropriated, and at its best: not an infantilizing force that habituates people to their prostration before a greater power, but a cultural force that anchors people in the lands and waters around them and furnishes them with the practices for a joyful, sustainable life.”

Many parts of the book are drawn from the author’s Haiti Chery blog, such as her detailed review of the Martelly government’s unilateral attempts to transform the bucolic Ile à Vache (Cow Island), just off Aux Cayes, into a tourist complex, without consulting with the island’s population. The author interviewed the leaders of the resistance that emerged and explains why and how the take-over foundered.

“If Haiti is a model of the world’s depredations, it is also a testament to human resistance.”

Chery takes to task some progressive U.S. journalists and intellectuals, charging them with being “high priests of journalism” who “promote the neoliberal agenda and encapsulate their disinformation in reasonable seeming and progressive-sounding language.” In her zeal to defend Haiti against the undeniable “propaganda war” and “disinformation campaign” waged against it, Chery may be blasting writers who are not the enemy, a little like an overactive immune system causes an allergic response. There surely is historical confusion, factual sloppiness, formulaic reasoning, and idolatry in some “leftist” writings on Haiti, and Chery’s indignation will make any well-meaning writer deeply reflect on whether their arguments do not bring water to neoliberalism’s mill in Haiti.

Similarly, Chery critiques “supposedly leftist governments like those of Ecuador, Argentina, Bolivia, Uruguay and Venezuela [which] have also eagerly supported the [Martelly] regime under the pretext that they would not wish to abandon Haiti to the U.S..” She should have noted, however, that Venezuela, for one, never joined MINUSTAH. Furthermore, officials from both the governments of the late Hugo Chavez and Nicolas Maduro have always defended their dealings with Martelly by saying that they would honor Venezuela’s commitments to the Haitian people (made under President René Préval) whether they liked Haiti’s political representatives or not, a principled approach with contrasts sharply with that of Washington.

There are quite a few detours in “We Have Dared to be Free.” Chery goes into great depth on the 2010 coup d’état attempt in Ecuador, on how a warming planet causes stronger storms and what damage they have caused worldwide, and on the history and tactics of Martin Luther King, Jr.

But all these detours lead back to her central and often revisited central thesis: “The systematic destruction of Haiti, if it is allowed to continue, will not be Haiti’s loss alone. Gone will be a cheerful and sustainable way of life, the taste for being sated with enough, which we must all learn to recover for the sake of our species’ survival.”

As Chery also notes in her introduction: “If Haiti is a model of the world’s depredations, it is also a testament to human resistance.”

Haiti’s 2010 earthquake awakened the engaged journalist lying dormant in a biology professor simply pursuing her career. “We Have Dared to be Free” is the result, a passionate and scientific argument for how Haiti still offers humanity an example to be followed.