Author Sudhir Hazareesingh is a native of the Indian ocean island and former French colony of Mauritius, once known as Ile de France. Drawing upon a lifetime of research in the French, British, and American archives, the Oxford scholar and expert on French history unearths primary sources and correspondence (untapped until now) which provide a deeper look at the legendary anti-slavery figure Toussaint Louverture and his worldview.

Black Spartacus is a rigorous history of Toussaint’s undying spirit and prodigious work for his people’s emancipation. A stranger to sleep and personal comfort, everyday the former-slave-turned-general and leader of a burgeoning nation dictated and wrote 200 letters to allies and enemies alike, covered 120 miles on horseback and convened meetings with dozens of leaders and their communities (213). The first chapter examines his coming of age as a slave on the Breda plantation, from which he received his slave name, and the influence Catholicism and vodou had on him. He later earned his name Louverture, meaning “The Opening,” on the battlefield inspired by “one of the most revered vodou deities, Papa Legba, the spirit of the crossroads; a popular kreyòl chant at the beginning of ritual ceremonies was ‘Papa Legba, open the gates for me.’” (43)

The middle chapters cover his time as “a general in the Spanish auxiliary army [where] he commanded a force of 4,000 men, as a French general who defeated the English invasion of San Domingue, and his writing of the 1801 constitution which outlawed slavery on the island for eternity.” (58) A diplomat, he had to maneuver between warring empires with superior armies and navies hell-bent on re-enslaving “the pearl of the Antilles.” Hazareesingh evaluates his role in the June 1799 “War of Knives” against André Rigaud and the Generals of Color (the “mulattos”). Supported by the British through their colonial administration in Jamaica, this intermediary class sought to wipe out the white planters and re-enslave the Blacks. Thoroughly opposed to “the relentless ethnic cleansing,” Louverture dreamed of and fought for a San Domingue for all classes. While protecting the lives of the white propertied class, he returned to rally his base on the plantations with his rallying cry: “I took up arms so that you may be free… and like you I was once a slave.” The battered, oppressed masses of former slaves were always his true source of power. 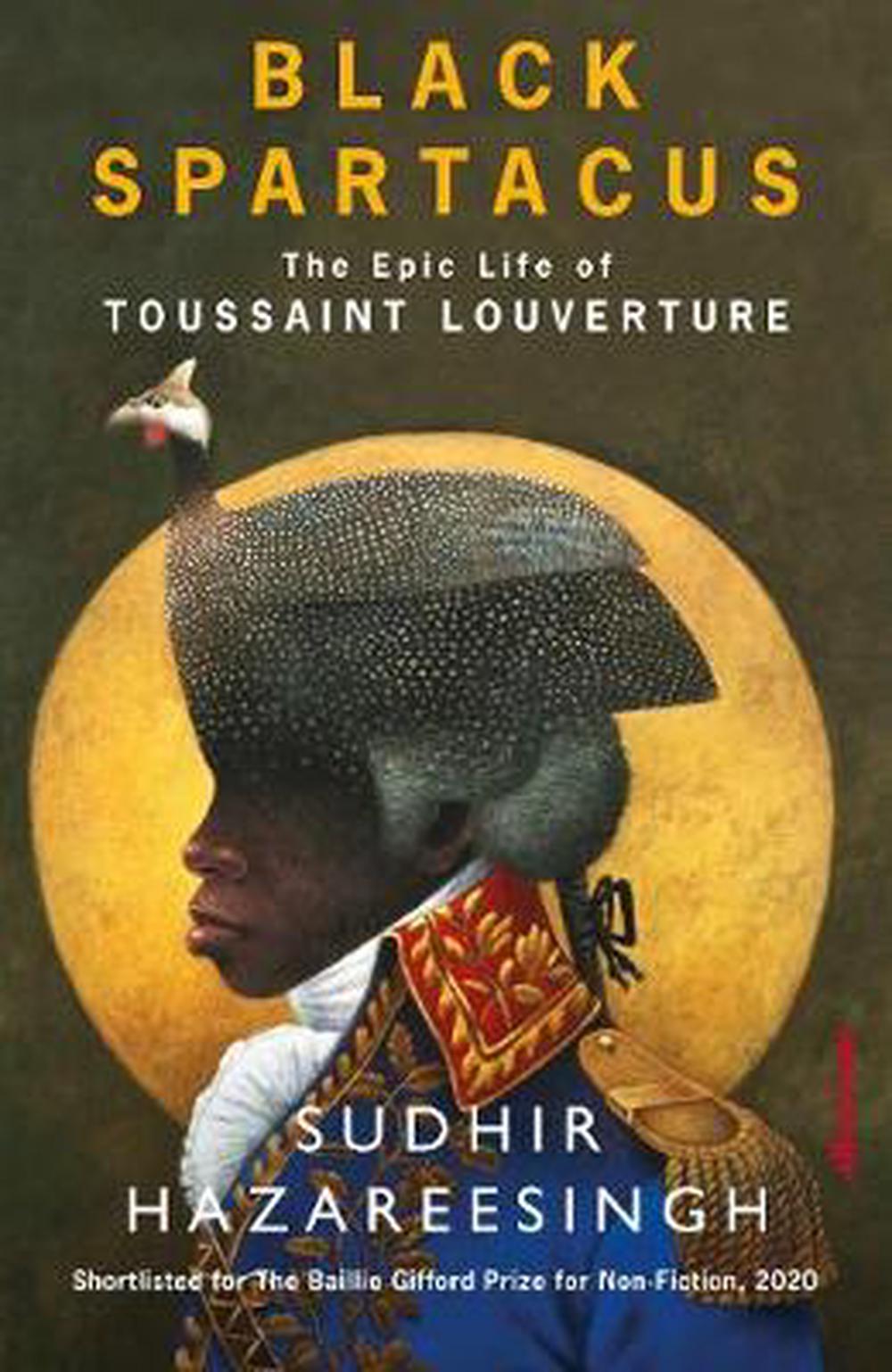 All books on the Haitian revolution must be held up to C.L.R. James’ The Black Jacobins: Toussaint L’Ouverture and the San Domingo Revolution. The 1938 classic of the historical materialist method continues to be the magisterial account of how the masses of Haitian slaves mobilized themselves into a people’s army and blow by blow, setback after setback, treachery after treachery, massacre after massacre, defeated Napoleon’s murderous French empire.

Hazareesingh’s main critique is that James gives too much credit to French Republicanism’s influence on Toussaint. Yet throughout the 427-page book, the author himself constantly reminds the reader of Toussaint’s loyalty to France. Both James and Hazareesingh agree on the essential components of Toussaint’s personality: he was “incorruptible,” a devout Catholic, a stickler for military order and social etiquette, and never forgot his roots. (193)

An admirer of French culture, language, and history, Toussaint felt San Domingue could never make it on its own. Toussaint had a type of neocolonial view that the Mauritian author interrogates. Without returning the former slaves to a bondage they so violently feared, the reader may be surprised to know that their very liberator bound them to the plantations in order to continue producing the enormous wealth of the past decades and centuries. The workers in return received one fourth of their harvest. Aware of the brutal, dehumanizing effects of the slave system, he saw the plantation economy as a necessary evil until the formerly enslaved people could build up their own economy and culture. He saw France as the indispensable mother country that would instill this “Republican” spirit in “her children.”

Surrounded by assassination plots and having been deceived from all sides, Toussaint “was extremely reluctant to communicate his intentions even to his leading military officers, or to share power with them in any meaningful way.” (291) Again, the Haitian general did not have the insights of future revolutionary cadre. Amilcar Cabral’s maxim: “Tell no lies. Expose lies whenever they are told. Mask no difficulties, mistakes, failures. Claim no easy victories…” was all too relevant. The cultivateurs (former slaves) must have wondered why their shining prince disciplined them while giving free reign to the colons (the white planters and former slave owners). It was as if Toussaint thought he could win over the antagonistic classes and wish away a class conflict based on the enslavement of millions of abducted Africans.

While in retrospect we can call Toussaint idealistic it is important to remember he did not have the advantage of drawing on the 1917 Soviet revolution, the 1949 Chinese Revolution, the Vietnamese’s popular resistance to French and then U.S. imperialism, or the 1959 Cuban Revolution. Unlike Makandal, Dessalines, Capois La Mort, his own adopted nephew Moïse (whom he ultimately executed), and other Haitian generals of the people’s war, Louverture was not willing to go all the way. Hazareesingh contrasts the Makandalist vs. Louverturian vision for Haiti. Ultimately, Dessalines was the man for the historical job of carrying the Makandalist project to its ultimate No Sellout, No compromise conclusion. The scorched earth strategy of “Koupe tèt Boule kay” (Cut off [the masters’] heads Burn down their mansions) was all the invading troops could understand. As 20,000 of General Leclerc’s soldiers occupied Cap Haitian in the north, Dessalines and his generals burned down the entire city and retreated to the mountains so that the invaders would have no base to call home.

While “his capacity to straddle divides across the ideological spectrum” within the anti-colonial camp was a great asset, it was also his hamartia, or flaw fatale (357). Like James, Hazareesingh shows how Toussaint, even as he died away in a dungeon at the infamous French Fort de Joux in 1803, never lost hope that colonial France would live up to the 1789 creed of “Liberté, Egalité, Fraternité.” Louverture remained a true Jacobin as France devolved again into a slave-holding empire. While revolutionary leadership through the ages will continue to debate whether his “non-racialist” view of humanity and progress was correct, they surely agree that his faith in his class and colonial enemies was his downfall. (39)

In a polemic with apologists for colonialism, the Guyanese revolutionary Walter Rodney states the conclusion that Toussaint’s unbounding faith in human nature never allowed him to reach:

“They [defenders of colonialism] would then urge that another issue to be resolved is how much Europeans did for Africans, and that it is necessary to draw up a ‘balance sheet of colonialism’. On that balance sheet, they place both the ‘credits’ and the ‘debits’, and quite often conclude that the good outweighed the bad… It is our contention that this is completely false. Colonialism had only one hand — it was a one-armed bandit.” (205)

Toussaint’s tragic fate reconfirmed that two classes, with entirely antagonistic class interests, could not coexist. Napoleon’s deception, kidnapping, torture, imprisonment, and murder of Toussaint was a most undignified ending for the most upright of men.

Hazareesingh’s final chapter, “A Universal Hero,” examines the vast array of tributes dedicated to the Haitian people’s general from future revolutions to the art, film, literature, and theater of future generations across the world. Facing death in a prison cell in 1954 Fidel Castro wrote that the Cuban revolutionaries were inspired “to revolutionize Cuba from top to bottom by the insurrection of Black slaves in Haiti, at a time when Napoleon was imitating Caesar, France resembled Rome, and the soul of Spartacus was reborn in Toussaint Louverture.”

Black Spartacus is a motivating read, and its examination of letters and documents from the Haitian revolution complements the foundational work of C.L.R. James.