Like the plantain weed, Plantago major, which so reliably matched the movements of European settlers through North America that it became known as “the white man’s footprint,” the cholera epidemics of the last 15 years have closely followed the growth and trajectories of United Nations troops.

Haitians have been infected not once, but at least twice with cholera from the UN. As of this writing, Haiti is smarting from a resurgence of cholera that began in September 2015. The infections are probably not due to the Nepalese strain of cholera that caused the October 2010 epidemic but to newly introduced cholera from Bangladesh. Recovery from an infection with one strain of cholera does not confer immunity against another, so the UN has sickened some unfortunate people and their children multiple times. Before I go into the details of the new epidemic, let us look more broadly at the UN peacekeepers’ role as a new vector of disease in the world.

The UN currently runs 16 military occupations, with guidance and funds from major world powers and the so-called emerging powers. Multinational armies of blue helmets prey on various countries, especially in west and central Africa, mainly to safeguard the colonial interests of France and the United States. Emerging powers like Canada, Brazil, India, and South Korea tag along, salivating for seats on the UN Security Council. Their representatives enrich themselves on the kickbacks from contracts for lucrative projects such as mining, peacekeeper training, construction, hydro-power, and textiles, which depend on the oppression of a supply of abundant cheap labor.

Altogether, the military occupation missions cost more than $8 billion per year. Their names are confusing interchangeable acronyms like MINUSCA, MINUSMA, MINUSTAH, UNMIL, and UNMISS, and it is quite appropriate that this should be so, because, everywhere the blue helmets go, their activities and atrocities are the same. These include assaults, rapes, arms trafficking, human trafficking, prostitution, murder, and the dissemination of infections. Except in Lebanon, where the actions of Hezbollah have kept the UN troops in check, cholera epidemics have flared up in every country where these troops have had a major presence since 1999. 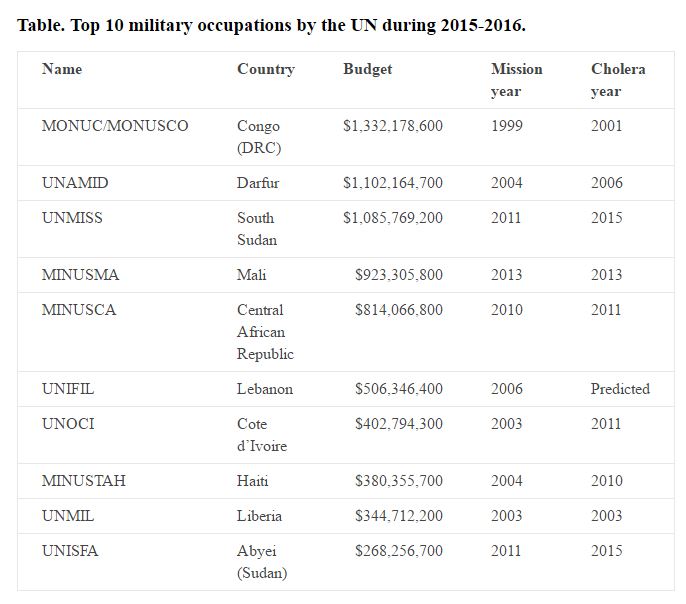 The above table suggests that, although Haiti’s 2010 cholera was the most scandalous and best-studied case of the UN’s introduction of an epidemic of disease into a country, it was probably not the first such infection nor the last. The reason for these infections is simple: the introduction of UN troops into countries represents a heavy burden on their infrastructure. The sanitation on UN bases is usually shoddy, and UN troops’ untreated wastes are routinely dumped into rivers. Furthermore, the largest contingents of UN troops come from Bangladesh, India, and Nepal, all of which are South Asian countries where cholera is endemic.

I have closely monitored Haiti’s epidemic and examined the others, and it is evident that they follow a predictable pattern. The citizens of the invaded countries are left to live under appalling conditions, usually near stagnant water and uncollected rubbish, while the UN and their associated medical non-governmental organizations (NGO) settle into the best living spaces and incessantly predict that the filth elsewhere will lead to a cholera epidemic for the native population. Simultaneously, contingents of UN troops are allowed to take leaves in their countries at the height of cholera epidemics, and they are subsequently reinserted, with little medical oversight, into the unsuspecting populations. Whether or not this practice is deliberately intended to trigger epidemics, it does so as surely as an injection of a growing bacterial culture leads to an explosion of exponential bacterial growth in a previously sterile broth. In the end, the victims are blamed for their supposed poor hygiene. The UN, which has caused the infection, not only gets away with it but recasts itself as a savior: a provider of oral cholera vaccines, which just happen to benefit its friends in academia with financial interests in the vaccines. It hardly matters that the vaccines are useless.

Recent research in Haiti has showed that, lately, when some Haitian cholera patients excrete the cholera bacteria in their stools, these bacteria are accompanied by a virus (or phage) called ICP2, whose DNA sequence closely matches that of a virus from Bangladeshi patients. It is certain that the Bangladeshi virus got into Haiti on Bangladeshi strains of cholera bacteria excreted by Bangladeshi peacekeepers. According to Andrew Camilli and his colleagues at Tufts University, who first sequenced the genomes of these viruses: “these phages also travel with V. cholerae into the human host and are shed at appreciable amounts by infected patients, where like V. cholerae they could be spread to others via fecal-oral transmission.” Bacterial hosts of the ICP2 virus include not only Vibrio cholerae O1 but also V. cholerae O139, which originates from Bangladesh.

This infection of Haiti with cholera from Bangladesh is terrible news, because the strains of V. cholera O1 and O139 from Bangladesh are notoriously pathogenic, usually carry multiple antibiotic resistances, and have strong epidemic and pandemic potential. Even after the cholera epidemic brought from Nepal in 2010, Haitians were naïve to the Bangladeshi cholerae and only became exposed to these more harmful bacteria, starting in 2012, when the UN began to introduce female Bangladeshi peacekeepers into Haiti as a sort of gimmick.

According to the American researchers, a cocktail of three Bangladeshi cholera viruses (ICP1, ICP2, and ICP3) protects baby mice from becoming ill after they are deliberately infected with cholera. The researchers suggest that this viral cocktail might prevent infections in the human relatives of cholera patients. On the other hand it might not, and instead make them very sick or even kill them. After all, humans aren’t the same as baby mice. In any case, such research that might potentially harm apparently healthy people would be highly unethical. Who will prevent it from being done on Haitians? Surely not the “Haitian National Ethics Committee” that has so far approved the work of the U.S. researchers. And who will expel the UN once and for all and put an end to the continued infection of Haitians with new strains of cholera?

The World Health Organization (WHO), which is part of the UN, reported in 2015 that there are 1.4 to 4.3 million cases of cholera and 28,000 to 142,000 deaths yearly due to cholera infections. These numbers will surely continue to climb, proportionately with the “peacekeeping” budgets. The WHO offers as its main solution the stockpiling of a large number of doses of oral cholera vaccines. Suppose for a moment that such vaccines should work — which they do not. Would the UN then advocate universal cholera vaccination for the world’s poor so that they might safely drink water that has been fecally contaminated by their invaders? The UN has never been the highly ethical organization it was envisioned to become, but its enthusiastic advocacy of oral cholera vaccines does represent a new low.

Dady Chery is a Haitian-born biology professor at a U.S. university. An earlier version of this article, under a different title, was originally published on her blog in January.

How Toussaint L’Ouverture’s Sacrifice Rekindled My Haitian Pride and Hope, After a Life of Shame and Anger