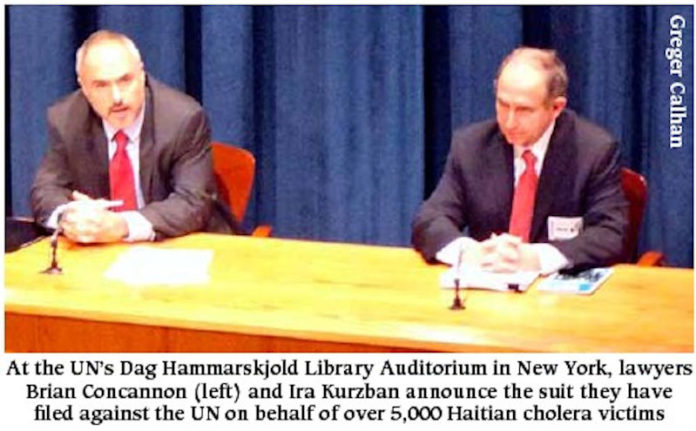 A cholera epidemic which began in October 2010 near the headwaters of the Artibonite River, Haiti’s largest, has now killed over 6,600 Haitians and sickened over 475,000.

On Nov. 3, over 5,000 Haitian cholera survivors, or the families of cholera victims who died, filed suit in Haiti and New York against the United Nations (UN) and the UN Stabilization Mission in Haiti (MINUSTAH) for introducing the deadly Vibrio cholerae bacteria into Haiti through Nepalese soldiers who are part of the military occupation force.

The 37-page document, delivered in both English and French to the Claims Unit Chief at MINUSTAH’s Log Base at the Port-au-Prince airport and to the office of Secretary General Ban Ki-moon in New York, charges that the “UN is liable for negligence, gross negligence, recklessness, and deliberate indifference for the health and lives of Haitian people resulting in petitioners’ injuries and deaths from cholera.”

The legal petition was written and submitted by attorneys Mario Joseph of the International Lawyers Bureau (BAI) in Port-au-Prince, Brian Concannon of the Institute for Justice and Democracy (IJDH) in Boston, and Ira Kurzban of Kurzban Kurzban Weinger Tetzeli & Pratt in Miami. They are requesting from the UN financial compensation for petitioners, constructive action to prevent cholera’s spread, and a formal acknowledgment of and apology for the UN’s responsibility for bringing cholera into Haiti.

“Until MINUSTAH’s actions incited the cholera outbreak, Haiti had not reported a single case of cholera for over 50 years,” the lawyers wrote.

The victims’ petition explains that the UN and MINUSTAH are liable for hundreds of millions of dollars for: 1) failing to adequately screen and treat UN troops arriving from countries experiencing cholera epidemics; 2) dumping untreated wastes from a UN base directly into a tributary of the Artibonite River; and 3) failing to adequately respond to the epidemic.

“This claim provides the UN with a chance to demonstrate that it is not above its own laws,” said lawyer Brian Concannon, who, along with Ira Kurzban, held a press conference  announcing the suit at the Dag Hammarskjold Library auditorium at the UN General Headquarters in New York on Nov. 8.

The complaint exhaustively lays out how “[n]umerous studies, including those of the UN itself; the [U.S.]-based Centers for Disease Control and Prevention; the Harvard Cholera Group; Dr. Renaud Piarroux, whose report the Haitian and French governments commissioned; the Wellcome Trust Sanger Institute in Cambridge, England; and the International Vaccine Institute in Seoul, Korea, have documented that the Vibrio cholerae virus was introduced to Haitian waters by MINUSTAH personnel deployed to Haiti from Nepal.”

One year ago, in the face of damning media investigations and angry Haitian demonstrations, the UN vehemently denied any responsibility for importing cholera into Haiti.

“The denial of responsibility for cholera is consistent with MINUSTAH practice of blanket denial of all wrongdoing, no matter how well documented,” said lawyer Ira Kurzban.

Most of the petitioners are from the Mirebalais, St. Marc, Hinche, and Port-au-Prince regions. “They include farmers, teachers, and caretakers whose injuries or death have left families without means to meet their basic needs,” the complaint states.

One of the petitioners is a relative of one of the first cholera victims who died on Oct. 22, 2010 at St. Nicholas Hospital in St. Marc, leaving behind his wife and 12 children. When working in an Artibonite Valley rice field, as he did each day, the victim “drank from the canal that irrigates the field,” the complaint explains. “Soon thereafter, he described to his family a sensation in his stomach ‘like boiling water.’ He began to vomit and spent the night at home in excruciating pain. The next morning, he went to the hospital. In the afternoon, he died.”

BAI Managing Attorney Mario Joseph said, “This is an opportunity for the United Nations to demonstrate that its stated ideals of eliminating disease and encouraging respect for rights are not just empty promises.”

The complaint notes that the UN is supposed to establish, but has not, a standing claims commission as required by the Status of Forces Agreement (SOFA), an accord signed between the UN and the Haitian government. “Under the SOFA, the claims commission is the forum that has jurisdiction to hear civil claims of Haitians injured by MINUSTAH’s actions,” the lawyers wrote. “The UN has yet to establish this commission, leaving victims without a clear route to seek accountability and relief.”

Undeterred, the lawyers sought out Terseli Loial, MINUSTAH’s Chief Legal Officer. He instructed the lawyers to file their petitioners’ claim with the chief of MINUSTAH’s Claims Unit.

“Courts have declared that immunity cannot mean impunity,” said Concannon. “If the UN refuses to provide an effective forum for resolving these complaints, national courts will.”