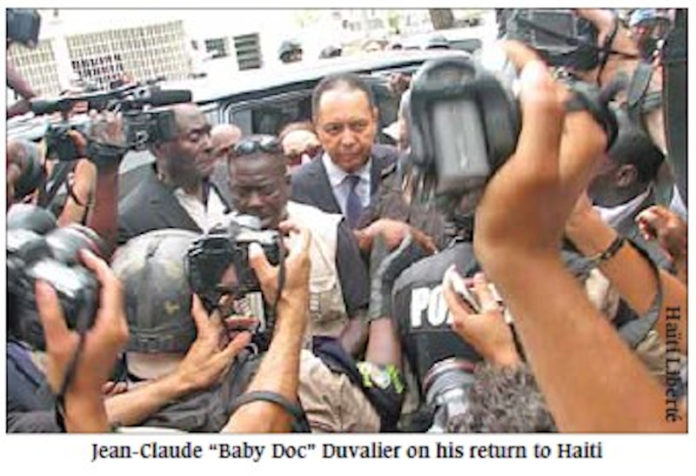 The big question Haitians are asking is: who is behind Jean-Claude “Baby Doc” Duvalier’s surprise arrival in Haiti with an expired Haitian passport on Jan. 16 aboard an Air France flight from Paris? “I have come here to see how I can help my country,” he announced, stepping off the plane.

Yeah, right. It is inconceivable that Baby Doc, 59, would return to the country where there are outstanding criminal proceedings against him without knowing that some powerful foreigners have his back.

With dozens of Haitian SWAT team police outside and a helicopter hovering overhead, Haitian government prosecutor Aristidas Auguste and investigating magistrate Gabriel Ambroise met for about an hour with Duvalier in his suite at the posh Hotel Karibe in Pétionville on Jan. 18 and then took him unhandcuffed to their offices downtown for more questioning, before allowing him to return to his hotel. Ambroise will now weigh the evidence, which sources say is solid and massive, that Duvalier, his former wife Michelle Bennett, and other cronies embezzled over $300 million (and by some counts almost triple that) during the course of his rule from 1971 to 1986. However, Judge Ambroise’s ruminations might take as long as three months, which lends the whole episode an air of “grimas,” as they say in Kreyòl, a face-saving show. Duvalier should have been arrested immediately at the airport, most Haitians say. Instead, he was escorted by Haitian police and United Nations occupation troops to his hotel.

It is inconceivable that Baby Doc would return to Haiti, where there are outstanding criminal proceedings against him, without knowing that some powerful foreigners have his back.

“Usually in Haiti a thief gets unceremoniously dumped into a pickup and carted off to a stinking cell to await trial in a few years or never,” quipped author and journalist Amy Wilentz on Twitter. Duvalier will await his improbable indictment dining on grilled conch at the Karibe.

He has this luxury because he has surely received a wink and a nod from powerful government sectors, even if not the official ones, in either the U.S. and/or France, the two nations which helped prop up his regime with economic and military aid. The U.S. also flew Duvalier out of Haiti on Feb. 7, 1986 on a C-130 loaded with his sports cars and motorcycles and his wife’s furs, while France has hosted his golden exile and protected him from prosecution ever since.

Duvalier’s lawyer is Gervais Charles, the head of the Haitian Bar Association. He makes the dubious claim that the files pertaining to the charges against Duvalier were all destroyed in the earthquake and that, anyway, the statute of limitations on the embezzlement proceedings, undertaken by several governments against Duvalier since 1986, has run out.

But Brian Concannon of the Institute for Justice and Democracy in Haiti (IJDH) says this is unlikely. “The statute of limitation on these financial crimes is something like five years after the last instance of investigation by a judge into the case,” he said, noting that “a July 3, 2009 order from the First Court of Public Law of the Federal Court of Switzerland said the Haitian government had informed it of criminal proceedings against Duvalier as late as June 2008.” On Jan. 17, the IJDH along with the International Lawyers Office (BAI) in Port-au-Prince issued a statement urging the Haitian government “to comply with Haitian law” by arresting Duvalier for embezzlement on the basis of rulings and investigations in both Haiti and the U.S..

The statement also pointed to “Duvalier’s human rights violations, including the torture and disappearances of political dissidents at the Fort Dimanche prison and other crimes committed by organizations under his control, including the Armed Forces of Haiti and the Volunteers for National Security (Tontons Macoutes). Mr. Duvalier is not protected against prosecution by any statutes of limitations” for these violations because they are “crimes against humanity, which are imprescriptible under international law.”

Meanwhile, former political prisoners and other victims like youth sports trainer Bobby Duval and former journalist Michelle Montas (Duvalier’s thugs destroyed her husband’s radio station in 1980) expressed their outrage that Duvalier was in Haiti without being immediately arrested and vowed prosecution.

The standard storyline being repeated today is that Baby Doc inherited François “Papa Doc” Duvalier’s repressive dictatorship in 1971 and continued it until the Haitian people rose up and chased him out of the country 15 years later.

History is, of course, a good deal more complicated than that, and between the elder and younger Duvalier regimes there are important differences, an analysis of which can help us decipher, or at least make an educated guess about, what lies behind Duvalier’s sudden return.

Throughout most of its 207 years, Haiti has had two ruling classes: the grandon, Haiti’s big landowning class, and the comprador bourgeoisie, an import-export merchant class based in the coastal cities, primarily the capital, Port-au-Prince. These two ruling groups carried out a bitter rivalry for political power in the capital, control of which gave one an upper hand over the other. This rivalry explains why Haiti’s history is checkered with at least 32 coups d’état. The grandon often organized rural militias which would run bourgeois presidents out of the capital, and the bourgeoisie often ousted grandon presidents with the standing city-based Army.

Papa Doc, a former country doctor who came to power in a military sponsored election in 1957, was a classic representative of the grandon, who extract surplus value from peasants through a form of semi-feudal share-cropping called the two-halves system or dèmwatye. The arch-reactionary grandon were often hostile to encroaching foreign capitalists, who sought to turn peasant sharecroppers into starvation-wage-earning workers. This put Papa Doc at odds with Washington officials, but they needed him as a bulwark against the spread of communism from revolutionary Cuba, only 60 miles west across the strategic Windward Channel.

To offset the bourgeoisie’s and Washington’s influence over the Haitian Army, François Duvalier, a student of Machiavelli, established his own militia, the infamous Tonton Macoutes. Their reign of terror and violence is legendary, immortalized in Graham Greene’s novel The Comedians and Bernard Diederich’s and Al Burt’s exposé Papa Doc: The Truth about Haiti Today.

The elder Duvalier used the Macoutes to beat back several Washington-sponsored (and ratted on) invasions during the Kennedy and Johnson administrations. But there was a sea-change in 1969 when Papa Doc received President Nixon’s envoy, Nelson Rockefeller. Shortly afterward, cheap labor U.S. assembly factories began setting up in Haiti.

When Papa Doc died of natural causes in 1971, he passed the title of “President for Life” (won in a 1964 referendum that some 2.8 million people voted for and only 3,234 against) to then 19-year-old Baby Doc, and the sweat-shop sector began to take-off.

Jean-Claude had gone to Haiti’s finest schools with the bourgeoisie’s children, developing a taste for fancy women, fast cars, and a less brutish reputation. He began to offer a “reformed” Duvalierism, called “Jean-Claudism,” in response to the Carter administration’s call for “human rights” in Latin America. Carter’s crusade was actually the beginning of a U.S. policy shift away from strong-arm and corrupt dictators like Duvalier to façade democracies which were backed by so-called multinational peace-keeping forces.

The push to reform the Duvalier dictatorship did not stop with Reagan’s election in 1980 as the old guard Duvalierists had hoped. Jean-Claude did crack down on journalists that year, exiling many of them. He also married archetypal bourgeois princess Michelle Bennett. That marriage begat an ugly new offspring, a kind of Macoutized bourgeoisie, which would become more familiar to the world during the 1991 and 2004 coups d’état against President Jean-Bertrand Aristide.

At the same time, the comprador bourgeoisie was transforming into a more assembly industry variant, typified by “Jean-Claudiste” and later coup-backing families like the Apaids, the Bouloses, the Brandts, and the Mevs.

Washington became peeved as Jean-Claude and his crew skimmed off millions of development aid dollars into Swiss bank accounts, money that was supposed to build better roads, water systems and electrical networks to serve expanding U.S. sweatshops and other foreign investments. Even the Pope visited Haiti in 1983 and warned that “Things must change here.”

Finally, in 1986, the U.S. decided to give Jean-Claude the boot, fully expecting they could easily install a puppet in post-Duvalier elections.

Among the democratic activists fighting for that change a quarter century ago was René Préval, now Haiti’s president. Like activist businessman Antoine Izméry and radio journalist Jean Dominique, Préval came from Haiti’s “enlightened bourgeoisie,” which was inspired by the anti-imperialist struggles of the 1960s and 1970s and dreamed of a democratic Haiti. Préval along with Izméry were the two who pushed Aristide , a former parish priest, into the electoral ring for president in 1990 against the neo-liberal U.S.-backed candidate, former World Bank economist Marc Bazin.

the bourgeois-grandon alliance, along with the U.S. and France, have a chance to install one of their preferred puppets through an election. This is likely why Duvalier is now in Haiti.

Six years later, Préval himself was Haiti’s president, thanks to Aristide’s long coattails. But over the past 15 years, he has compromised repeatedly with the U.S. empire he once vowed to fight, bowing to their demands that Haiti privatize its state enterprises, lower its tariff walls, and allow U.S. military aircraft and vessels to enter Haitian airspace and waters any time they please.

Préval has gradually been turned into Washington’s patsy, often happily but sometimes grudgingly, doing its bidding. Until now.

Washington and Préval are presently at loggerheads over the disastrous Nov. 28 elections, which Haiti’s Provisional Electoral Council claims should go to a second round between neo-Duvalierist former First Lady Mirlande Manigat, who supposedly came in first, and Jude Célestin, the candidate of Préval’s party Unity.

But the Organization of American States (OAS), acting on Washington’s behalf, has issued a report that orders Préval to change the second-place candidate to neo-Duvalierist former konpa musician Michel “Sweet Mickey” Martelly. “There is nothing to negotiate in the [OAS] report,” said  US ambassador to Haiti Kenneth Merten. But Préval is resisting. And this is where Duvalier, his old nemesis, comes in.

Manigat and Martelly are essentially the old and young faces of resurgent Duvalierism, of which Baby Doc is the living symbol. Célestin is not that much different; he was, after all, escorted to enlist as candidate by Rony Gilot, an infamous Duvalierist crony who is today escorting Baby Doc around Haiti. But Célestin is suspect because “sources in the American government know that Préval recently sought $25 million from [Venezuelan president Hugo] Chávez to bankroll [Célestin’s] runoff campaign,” complained the American Enterprise Institute’s Roger Noriega, who as President George W. Bush’s Assistant Secretary of State for Western Hemisphere Affairs, was an architect of the 2004 coup against Aristide.

So we have come full circle. For the first time in 20 years, the bourgeois-grandon alliance, along with the U.S. and France, have a chance to install one of their preferred puppets through an election, however patently bogus, rather than a coup. This is likely why Duvalier is now in Haiti.