At age 25, he’s watching helplessly as his animals sicken and die, one by one.

Perhaps some could be saved, but no veterinarian is willing to come out to his farm to examine them. Home remedies for reducing fevers, such as concoctions of Angola pea and neem leaves, have been no match for Haiti’s latest scourge: African swine fever, a highly contagious virus with no vaccine that has resurfaced after a four-decade remission.

“I’ve been a pig farmer all my life. I started working at my father’s pig farm when I was very young and learned everything back then,” Joseph says. “I had eight sows, but today I only have three piglets left.”

Natural disasters, political instability, armed gangs, and the coronavirus pandemic have rocked Haiti for the past three years. For its pig farmers, however, the biggest immediate threat is the return of African swine fever, combined with the shortage of veterinarians able and willing to visit them.

One of Joseph’s neighbors, Junior Pierre-vil, lost all 11 of his pigs in November. He didn’t even bother trying to reach the nearest veterinary clinic, in the suburb of Diquini, because he says he can’t afford to compensate them for the violence they would risk on the 14.5-kilometer (9 mile) journey.

“Insecurity is a plague,” Pierre-vil says.

Pig farming and pork-based cuisine are deeply anchored in Haiti’s history and culture. With more than 1 in 4 Haitians living below the international poverty line of $1.90 a day in 2021, according to World Bank data, pigs are their own form of currency. An adult pig can bring in 30,000 Haitian gourdes (about $260). Prices have also risen due to the impact of swine flu on supplies; last year, a piglet cost 2,500 gourdes (around $21.50); the price is now 5,000 gourdes (about $43).

The country’s pig population is estimated at about 800,000. Swine flu viruses are transmitted between the animals through fluids including urine and saliva. There is no effective treatment or vaccine against the African variant; infected pigs must be slaughtered to prevent further spread.

more than 4,700 animals have died or been killed, including 529 pigs infected with the virus

On Sept. 20, 2021, African swine fever was confirmed in samples taken a month earlier from a farm in Anse-à-Pitre, a commune in southeast Haiti. The farm had 2,500 susceptible animals, of which 234 subsequently died and 750 were slaughtered. In response, the Ministry of Agriculture, Natural Resources and Urban Development declared a state of alert and rolled out a number of initiatives — including increased staff training, early identification and efficient management of hot spots, and killing pigs from 80 infected farms. Between September 2021 and May 2022, inspections have been carried out at more than 4,000 pig farms, with an African swine fever positive rate of nearly 27%; more than 4,700 animals have died or been killed, including 529 pigs infected with the virus, says Dr. Haïm Joseph Corvil, coordinator of the Health Protection Unit at the agricultural ministry.

During the African swine fever outbreak in the 1980s, Haiti’s government ordered the slaughter of all pigs, killing between 387,000 and 1.3 million animals. The country has aimed for a less economically devastating response this time, says Charles Pierre-Charlemagne, director of the agricultural ministry’s quarantine department.

“We are taking a much more cautious approach now by raising awareness among farmers and collecting samples more often, in order to detect an outbreak of African swine fever early,” he says.

Although farmers say the crisis has highlighted the need for more veterinary services, “the shortage of vets is not to blame” for the current outbreak, he says. The priority, he adds, must be improving the country’s data gathering and its safety and monitoring policies for livestock farming.

”There’s a lack of organization,” he says. “There’s no government support to create databases needed to know the number of pigs by department, the distribution [of pig population] and farming units.”

Joseph Norélus Pierre, a veterinarian and former director of the agricultural ministry’s breeding and animal health department, says many of his colleagues have chosen to emigrate for their own safety. He has decided to stay for now, even though three years ago, he says, a team of veterinary agents under his supervision was attacked and robbed during a rabies vaccination campaign in Cité Soleil, a Port-au-Prince commune.

Yet on paper, the numbers have improved since the last African swine fever epidemic. In 1986, there were only four veterinary doctors for the whole country. Today, there are 70 veterinarians, supervising about 1,565 veterinary agents — people who have been trained in basic skills by nonprofits or the veterinary school at the Université d’Etat d’Haïti.

Veterimed has trained more than 1,500 veterinary agents since 1991, says Rosalie Moise Germain, director of the nonprofit that supports both animal health and livestock farmers. There used to be two to three veterinary agents for each of the country’s 571 communal sections; but in the past generation, dozens have retired, emigrated or changed careers, she says. An inventory is needed of all existing veterinary agents, including their locations and training levels, in addition to an effort to train a new generation, she says. 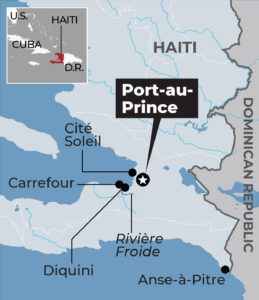 Sainclus Joseph, a veterinary agent for more than 10 years in Port-au-Prince, says the problem is that Haiti’s farmers are not willing or able to pay for veterinary care, even when doctors are available. They expect the government to pay for treatments as a matter of national interest, or some are ignorant about the effectiveness of preventative medications and treatments, he says.

“Feeding the pigs is important, but there are also preventive measures for certain diseases,” he says. “It is expensive, but clearly effective and safe.”

Dieuseul Juste, a 65-year-old farmer in the Rivière Froide area of Carrefour, disagrees, saying that he has put a lot of effort into trying to find new veterinarians or veterinary agents, both personally and as the coordinator of a farmers’ organization, Neg Vanyan. The doctors are afraid of being attacked or kidnapped if they travel beyond their neighborhoods, he says.

“I was willing to pay,” he says. “We need support as we feel isolated and abandoned. There is nothing we can do when our farm animals get sick, and my community has lost more than 100 pigs.”

In addition to the economic toll, the loss of their pigs also puts an emotional strain on the farmers.

“I’ve spent nights asking myself what I should do. I have no animals, no hope,” says Mezira Joseph, Rony Joseph’s father, who farms nearby and lost close to 20 pigs to African swine fever in the last year. “It’s hard to be in this type of situation where you can’t do anything and realize that all your earnings are gone, just like that.”

Until they can save up to buy more livestock, pig farmers are subsisting by growing vegetables, he says. Even if they can restock their pens, however, they will remain in a precarious position if veterinary care is not available the next time a disease breaks out.

“What we need is young people in our community to train as vet officers,” Mezira Joseph says. “This way, we could have access to vaccines and protect our farm animals from flu viruses and other diseases. This is what we’re hoping for.”