Aveyron Academy is a program run by the New York Department of Education’s District 75, which serves the city’s special needs kids. Based at the Canarsie Educational Campus at 1600 Rockaway Parkway in Brooklyn, the program provides training in basic life skills for young people primarily challenged by autism and cognitive delays.

On Fri., Jun. 17, 2022, there was a ribbon-cutting ceremony to dedicate the program’s “Living Classroom,” where students are taught how to carry out the tasks of daily living like cooking, laundry, sorting, cleaning, and operating a television set. This prepares them for living independently.

Dr. Yvrose Pierre, the principal of the Aveyron Academy in Canarsie as well as three other Averyron programs at other schools, presided over the ceremonies, which were attended by District 75 Superintendent Ketler Louissaint. Haitians are not only in leadership positions of the district and Aveyron programs, they are also the teachers, including Tamara Aurélus, Marie Jean-Philippe, and Natasha Ulysse at Aveyron Academy.

“I’m the mother of five kids, one of whom is deaf,” Dr. Pierre told the assembled staff, students, and administrators. “She’s now 30 years old. So I’ve spent my life fighting to make sure that she’s good and advocated for so that she gets what she needs. So when I came here as principal, I was not going to sit back and let the school run itself. I had to be proactive and hire strategically, so we got great people.” 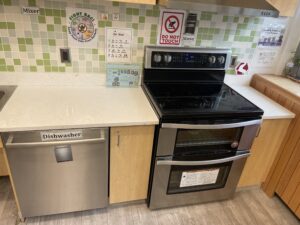 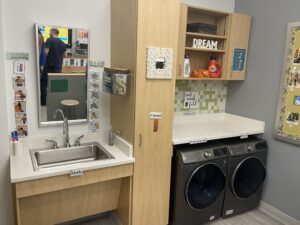 In addition to speeches, the ceremony included dance and singing performances by the students, as well as a poetry reading.

“I am special, just like you, I’m good at many things I do,” read student Khalid Kelley in his touching poem. “Learn from the best, I can. Make a difference with who I am.”

After the ribbon-cutting, students and staff gathered for food and drinks in the immaculately-maintained “Living Classroom.” A video of the program’s teachers training the students was also shown.

The program’s name and curriculum is based on the work of 19th century French physician Jean Marc Gaspard Itard, who developed methodologies to rehabilitate “Victor of Aveyron,” a child who lived isolated from human contact in rural southeast France and was therefore intellectually and physically delayed.

In addition to teaching life skills, the Aveyron Academy also instructs young people, up to age 21, how to write a résumé, establish credit, and operate computers, cameras, projectors, and other technology. Some of the graduates are hired back into the program.

“We have to prepare our graduates to be able to self-sustain and function as adults,” Dr. Pierre concluded.