The largest and most important percentage to emerge from Haiti’s Nov. 20, 2016 election is that 78.31% of the country’s 6.2 million eligible voters did not vote.*

Some could not obtain their National Identification Card (CIN) or find their name on the long voter lists posted on the gates of huge voting centers. Others could not get to their assigned center because they live or work too far away, perhaps in another part of the country. In fact, the whole “voting center” system, which is different from that used in the 1990s when participation was much higher, has objectively suppressed the votes of many poor, itinerant Haitians.

Nonetheless, it appears that the vast majority of Haitians remain disenchanted with or unmoved by the candidates offered in the last four presidential contests in 2010, 2011, 2015, and 2016, or have lost faith in elections as a means to change their miserable lot. Participation in all those contests lurked at about one quarter of the electorate. The November 2016 polling is one of the lowest turnouts for a presidential election in Haiti and the Western Hemisphere.

Of the 21.69% of voters who did turn out, preliminary results of the Provisional Electoral Council (CEP) gave: 55.67% to Jovenel Moïse of former president Michel Martelly’s Haitian Bald Headed Party (PHTK); 19.52% to Jude Célestin of the Alternative League for Progress and Haitian Emancipation (LAPEH), an affiliate of former president René Préval; 11.04% to Moïse Jean-Charles of the Dessalines Children (Pitit Desalin) party, a Lavalas break-away; and 8.99% to Maryse Narcisse of former president Jean-Bertrand Aristide’s Lavalas Family Political Organization (FL). Final results are scheduled to be announced on Dec. 29, 2016.

The FL has charged that the preliminary results reflect an “electoral coup d’état,” and LAPEH and seven senators claim that many ballots lacked the necessary voter signatures or fingerprints to make them valid. 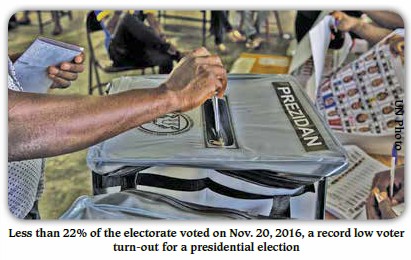 Indeed, the results’ announcement, originally scheduled for Sun., Nov. 27, was postponed until the next day at 1:00 p.m., and then for another nine hours after that. Radio stations excitedly buzzed with accounts of fraud and struggle within the CEP. In one Radio Kiskeya interview greatly debated on social media, Harold Désinor, a supposed specialist is cyber-crime, claimed that over 60% of the voter tallies (procés verbal) were fraudulent or irregular, that the results were being changed from 46% for Jovenel and 26% for Jude to 58% and 18% respectively, and that four of the nine CEP members were refusing to sign off on the preliminary results. Indeed, three CEP members did not sign the paper listing the results, which were released after 10 p.m. on Nov. 28, but, at press time, they had not publicly given their reasons why.

The FL, for one, has vowed to take their objections to the National Electoral Complaints and Challenges Bureau (BCEN). Since the days right after the Nov. 20 election, the party has been holding spirited street demonstrations in Port-au-Prince denouncing the contest as fraudulent. While some cases of fraud are likely to be discovered, they probably will not change the final outcome enough to stop a PHTK first-round victory, which comes with a 50% plus one vote result or a 25% spread between first and second place. Already, of 11,870 tally sheets, 1,252 have been set aside by the CEP, and 118 have not yet been received.

Jovenel Moïse’s likely win seems to fit a pattern of electoral victories by right-wing businessmen across the hemisphere: Juan Orlando Hernández in Honduras (2013), Mauricio Macri in Argentina (2015), and Donald Trump in the U.S. (2016). Jovenel, 48, crisscrossed Haiti promising jobs, holding up his successful business of exporting bananas to Europe.

Clearly, the PHTK candidate, known as “Nèg Bannann,” also outspent all his rivals. While the source of his campaign’s extensive funding remains unclear, it is certain that he benefitted from the millions of dollars which the Martelly clique skimmed from the PetroCaribe fund, a multibillion dollar pot of petroleum sales receipts made possible by Venezuela for public welfare projects. Without hiding its brazen political patronage, the Martelly regime used these projects – like Ede Pèp (Help the People), Aba Grangou(Down with Hunger), et Ti Manman Cheri (Dear Little Mother) – to give away free meals, vehicles, and houses to win over Haiti’s poor, the traditional Lavalas base.

The PetroCaribe fund also allowed the PHTK machine to have the most posters, the largest billboards, the best produced radio spots, ads on Digicel 50 gourdes cellphone recharge cards, and sound-boats blasting the coast with their propaganda. Their candidate had the money to distribute the most “aid” after Hurricane Matthew ravaged the south in October and to campaign more widely and impressively deep in the countryside, not just the cities.

Finally, one has to look at what has weakened Haiti’s progressive parties. In 1990 and 2000, Jean-Bertrand Aristide won the presidency with 1.6 and 2.2 million votes, versus the 595,000 who apparently voted for Jovenel this year. Immediately after both of Aristide’s victories, the U.S. government immediately began to sabotage his government, resulting in the coups d’état of 1991 and 2004. In the words of lawyer Brian Concannon, Jr., his governments were never allowed the opportunity of “demonstrating how democracy can work.” Therefore, many young Haitians, who don’t remember the brutal Duvalier dictatorship which ended in 1986, associate the Lavalas reigns under which they grew up with instability, deprivation, and crisis.

While Aristide’s reputation can still turn out a large crowd, as the 2016 campaign showed, the FL candidate he stumped for, Dr. Maryse Narcisse, was not a public speaker and did not generate great passion in the Lavalas base. The FL had been excluded from elections since the 2004 coup.

Meanwhile, the charismatic former Sen. Moïse Jean-Charles, who had been in the forefront of denouncing the Martelly regime’s corruption and repression, gained national recognition for his courage and leadership but was expelled from the FL for various ideological and tactical differences. He proposed a more Dessalinien (i.e. anti-imperialist) path to Aristide’s reliance on the bluff-based political triangulation tactics (mawonaj) of Toussaint Louverture.

After launching the Pitit Desalin split-off in 2015, Moïse Jean-Charles was unable to build it into an effective, disciplined party based on principles and a program, relying heavily on dubious alliances with political opportunists and even enemies. As a result, Moïse’s party suffered almost regular defections and betrayals. His partisans also began to clash with those of the FL, confrontations which helped neither campaign.

In short, divisions in the progressive camp helped Jovenel Moïse, around whom Haiti’s right wing and neo-Duvalierists rallied.

Despite his likely (but compromised) victory with only 12% of the electorate, Jovenel is sure to face a difficult five year term. Venezuela, to which the Haitian government still owes over nine months of back gas payments, is now in dire economic straits. A PHTK government will no longer have the deep PetroCaribe pot to dip into, if indeed the PetroCaribe program even continues.

Furthermore, the Haitian government’s anti-corruption unit UCREF put out a scathing report on the malfeasance of Jovenel’s company Agritrans under the Martelly regime. Although the report’s revelations were not enough to sink his campaign, they will certainly return with a vengeance if the jobs and prosperity Jovenel promised fail to materialize.

It is inevitable too, if the apparent losers don’t coalesce into a single coalition to fight and scuttle these election results like those of Oct. 25, 2015, that the progressive currents, including the FL and Pitit Desalin, will reflect on their defeat, and this may also lead to some future unity.

Again, the figure to remember is the 5.2 million disenfranchised and discouraged Haitians who did not vote, not the one million who did. They will be the tinder in a box which is already surrounded by many burning matches.

* If we accept the CEP’s figure of 6,189,253 eligible voters participating at 21.69% (according to the Haitian Coalition of Electoral Observation), then 1,342,449 voted. However the CEP’s preliminary figures only cite 1,069,646 valid votes (along with 58,120 voided votes or votes nuls). That leaves a discripancy of 214,683 votes unaccounted for. Are these votes contained in the 1,252 voter tallies quarantined and the 118 not yet received (as of Nov. 28)? Furthermore, authorities have said that, after Hurricane Matthew, some 600,000 people applied for new voter cards (Carte d’identification nationale or CIN) but were unable to get them. This makes over 800,000 eligible voters whose votes have not been counted. The legal challenges of fraud may further increase this figure. Since Jovenel Moïse’s lead over Jude Célestin is only 386,593, the final results, to be announced Dec. 29, are far from certain.