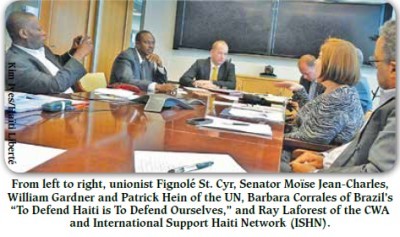 A high-ranking UN official is now saying that the Security Council plans to keep UN troops in Haiti for another three years despite a unanimous Haitian Senate resolution demanding their departure no later than May 2014.

On Oct.10, a large international delegation met with United Nations officials at the UN headquarters in New York to express their strong opposition to the continuing foreign military occupation of Haiti and to demand the immediate withdrawal of troops. The same day, the Security Council voted to renew the mandate deploying UN troops in Haiti for another year, until Oct. 15, 2014.

Led by Haitian Senator Moïse Jean-Charles, the 14 delegates from Haiti, Brazil, Mexico, Guadeloupe, and the United States met with William Gardner, the Integrated Operational Team Leader for the UN’s Europe and Latin America Division of the Department for Peacekeeping Operations (DPKO), and his assistant Patrick Hein.

This is the third year that the international committee “To Defend Haiti is to Defend Ourselves,” based in Brazil, has organized a delegation to pressure UN officials to withdraw the UN Mission to Stabilize Haiti (MINUSTAH), which was deployed on Jun. 1, 2004.

At last year’s meeting, Gardner said that the MINUSTAH would possibly be withdrawn after 2015. At this year’s meeting, he pushed back the “possible” exit date another year until 2016.

“So the Secretary General will provide to the Council in his next report [on Haiti] in March a series of proposals for a post-2016 scenario, which could include a departure of MINUSTAH,” Gardner told the delegates in a conference room on the Secretariat’s 27th floor. “All options are possible.”

The response outraged the delegates, who all presented arguments for why the UN must leave Haiti.

“In 2004, President George Bush invited Brazil’s president [Ignacio da Silva] Lula to have Brazil lead UN troops in Haiti for only six months,” said Barbara Coralles, the coordinator of the Brazilian anti-MINUSTAH committee which has affiliates throughout Latin America, North America, and Europe. “Now, it’s been almost 10 years. Why is the sovereignty of the Haitian people being trampled?”

Sen. Moïse Jean-Charles stressed that the Haitian people, via their elected representatives, have resoundingly rejected the presence of UN troops on Haitian soil, which is in flagrant violation of the Haitian Constitution and of Chapter 7 of the UN Charter.

“We are not at war,” Jean-Charles told Gardner. “How can we have United Nations troops stationed in Haiti? In a Senate resolution we called for MINUSTAH’s withdrawal from the country and we clearly said: after May 28, 2014, MINUSTAH should be out of Haiti.”

“It is a form of modern colonialism,” the senator added. “It is obstructing our self-determination.” 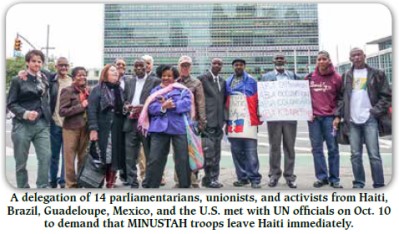 The delegates from Guadeloupe, Mexico, and the U.S. also explained to Gardner why people in their nations opposed the MINUSTAH and would fight for its end.

“We would like to see the UN live on,” said Colia Clark of the Guadeloupe Haiti Tour Committee, who has visited Haiti several times to speak against MINUSTAH, “but live on as a body that represents the people of the world and not the international corporate capitalist interests, especially those of the United States, that it now seems to serve.” Clark is a veteran of the U.S. civil rights struggles, having worked and marched with Medgar Evers and Martin Luther King, Jr..

The delegation also visited with unions in New York with an eye to deepening ties of solidarity and support. On Oct. 10 it met with Arthur Cheliotes, the President of Local 1180 of the Communications Workers of America (CWA) and on Oct. 11 with Ozzie Lo Verme, the president of Local 808 of the International Brotherhood of Teamsters.

Finally the delegation held a meeting with the Haitian community of New York at Haïti Liberté’s Brooklyn office on the evening of Oct. 11, where Sen. Moïse Jean-Charles, Yves Pierre-Louis of Haïti Liberté’s Port-au-Prince office, and Eddy Damas and Jocelyn Lapitre of the delegation from Guadeloupe spoke. Luis Baro, a representative of the Cuban Embassy in New York, also attended the meeting and spoke, as did Colia Clark.

Below is the final resolution put out by the delegation that visited the UN.

We — the undersigned political and trade union leaders, human rights activists, peace and democratic rights activists — have been mandated by the Continental Conference For the Withdrawal of UN-MINUSTAH Troops from Haiti — To Defend Haiti Is To Defend Ourselves” to present to the United Nations officials in New York the conference’s unanimous demands:

– Compensation for all the victims of the cholera epidemic!

The Continental Conference was held in Port-au-Prince, Haiti, on May 31-June 1, 2013, with the participation of 140 delegates from ten countries. It was the third such conference since 2008.

Our delegation was received at the United Nations on Oct. 10, 2013, by Mr. William Gardner, Integrated Operational Team Leader, Europe and Latin America Division, Office of Operations, UN DPKO, to whom we presented the results of the Continental Conference.

Our delegation underscored, in particular, the importance of the resolution adopted by the Haitian Senate, which, as a co-custodian of Haiti’s national sovereignty, took a stand to demand “a gradual and orderly withdrawal of U.N. troops in a lapse of time not exceeding one year (1) to be counted from the date of the vote of the present resolution, i.e., no later than May 28, 2014.”

Based on the reports presented by the Haitian delegates to the UN officials, our delegation was able to put the spotlight on the current situation in a country that for 10 years has suffered under the boot of military occupation, focusing in particular on the involvement of the UN-MINUSTAH forces in political repression in response to the popular mobilizations; the absence of calls to hold elections; the impossibility to hold truly democratic elections in a country under military occupation; the increased abuses by the UN troops (all protected by UN impunity); and the inhumane situation of Haitians living in the Diaspora.

Mr. Gardner, representing the United Nations, replied that in defiance of the will of the sovereign institutions of Haiti and of the Haitian people themselves, “the United Nations will maintain the MINUSTAH troops in Haiti until at least 2016.”

Our delegation reaffirmed that the campaign will continue and broaden to demand the immediate withdrawal of the UN-MINUSTAH troops from Haiti. In this vein, our delegation calls upon all governments to respect the resolution voted by the Haitian Senate in the name of the Haitian people for the withdrawal of the UN-MINUSTAH troops “no later than May 28, 2014.”

That is why our delegation calls for the continued and broadest mobilization on all continents for the immediate withdrawal of the UN-MINUSTAH troops from Haiti.

Ten years is enough! Let’s make 2014 the year of the broadest and most powerful mobilizations for the withdrawal of UN-MINUSTAH troops from Haiti.

* Let us demand that governments throughout Latin America and the Caribbean — as well as all governments involved in the occupation of Haiti — immediately carry out the withdrawal of these troops from Haiti!

* Let us call upon the parliaments/congresses of these countries to insist that they respond positively in solidarity with the appeal issued by the Haitian Senate!

* In each country, let us reach out more widely to the popular, democratic, political and trade union organizations and invite them to join this campaign in the manner they consider most appropriate!

In the framework of the decisions of the Continental Conference held in Haiti on May 31-June 1, 2013, the organizations involved in the campaigns that were adopted are currently considering initiatives at the continental level for the first semester of 2014, including the perspective of holding a Fourth Conference on Haiti. As these decisions are taken, we pledge to get the word out widely to deepen the campaign.

More than ever, the demands raised by the 2013 Continental Conference are the order of the day for all peoples the world over:

– For the Immediate Withdrawal of UN-MINUSTAH Troops from Haiti!
– To Defend Haiti Is to Defend Ourselves!

The delegation was supported by messages, motions and letters from the following individuals and organizations: