For the fourth time, a large international delegation has traveled to the United Nations headquarters in New York to file a formal protest on Jul. 20 against the continuation of the UN’s illegal military occupation of Haiti and to demand that it pay reparations to the victims of UN-imported cholera.

Ten delegates from Haiti, Brazil, Guadeloupe, and the United States met with the United Nations Assistant Secretary-General for Peacekeeping Operations El Ghassim Wane and William Gardner, the UN’s lead Political Affairs officer, to deliver a joint letter in French (see English translation below) condemning the continuation of the UN Mission to Stabilize Haiti (MINUSTAH) under a new name starting in October: the UN Mission to Support Justice in Haiti (MINUJUSTH).

The “follow-on peacekeeping mission,” as it is called in the UN Security Council’s Resolution 2350 of Apr. 13, 2017, will be made up of about 1,300 policemen to “support political stability, [and] good governance, including electoral oversight and reform,” wrote UN Secretary General Antonio Guterres in a Mar. 16 report.

“After 13 disastrous years of sowing violence, sexual abuse, waste, and disease, the UN still thinks it can just trample the Haitian Constitution and UN Charter and anoint itself to supervise and direct sovereign Haitian affairs like elections and governance,” said unionist Ray Laforest of the Dessalines Coordination (KOD), one of the delegates. “These UN officials are simply the handmaidens of Washington, Paris, and Ottawa, Haiti’s neo-colonial masters presently, but not for much longer we hope.”

“We, the Haitian people, want only two things,” said another delegate, Sabine Guerrier of the Dessalines Children Platform (PPD). “For them to get out and to pay.”

This was the fourth delegation to the UN headquarters organized by “To Defend Haiti is to Defend Ourselves,” an international committee based in Brazil and dedicated to pressuring the UN to withdraw its troops, who were deployed on Jun. 1, 2004 following the Feb. 29, 2004 coup d’état against President Jean-Bertrand Aristide. The last delegation was in October 2013, and at that time William Gardner suggested that UN troops might pull out after 2016.

“Finally, they announced MINUSTAH’s departure, but as they did it, they announced another mission supposedly to assist Haitian justice,” said former PPD presidential candidate and senator Moïse Jean-Charles, another delegate, in remarks to Mr. Wane and Mr. Gardner at the meeting. “What does that mean? We do not agree with this!”

The stated mission of MINUJUSTH to supposedly “support justice in Haiti” is “a supreme irony,” said Kim Ives of Haïti Liberté in his remarks to the UN officials. When there were “hearings… here in New York City to ask the United Nations for reparations for the victims of cholera, [a request] which the United Nations refused to entertain in its own grievance system, they did not even deign to send a lawyer to the hearings held here in Manhattan. It would not have been difficult.”

In the delegation were two union leaders, Antonio Lisboa of the Unified Workers Central (CUT), Brazil’s largest union, and Patricia Pioche, the assistant Secretary General of the General Union of the Workers of Guadeloupe (UGTG), Guadeloupe’s largest union.

Almost all the delegates made remarks after delivering the joint letter, to which Wane responded at the end.

“I take note of all you have said,” he said. “We have an entirely different perspective from yours. We believe that the successive missions we have deployed, MINUSTAH in particular, try to make a contribution to the success of Haiti in addressing the many challenges facing the country.” 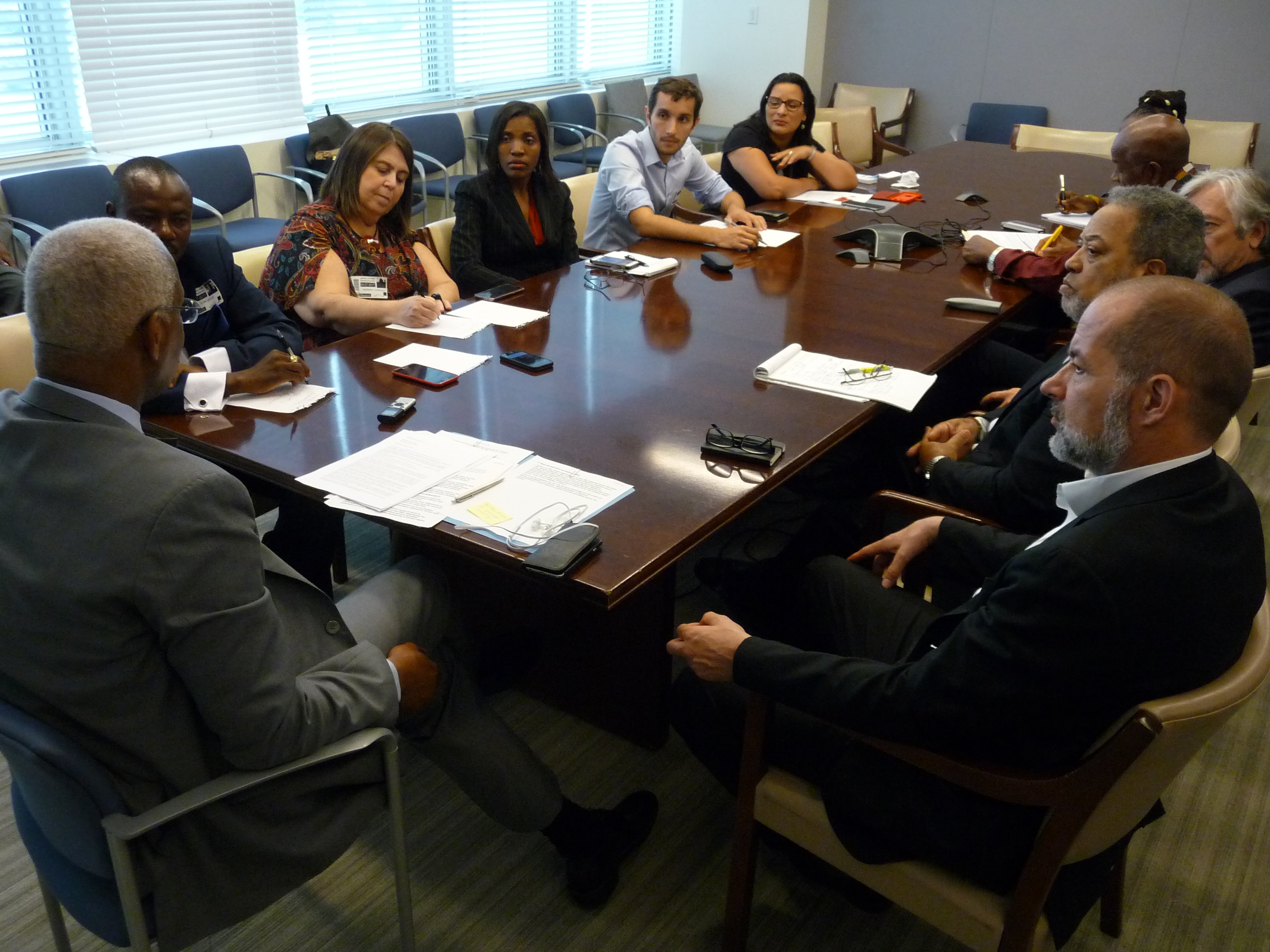 He said the UN was working to help Haiti in its “struggle against cholera, which is a disaster,” without ever admitting that UN troops imported the disease in October 2010. “Unfortunately, the success we are hoping for is not always there. We are the first to be sorry.” The UN has raised less than 1% – $2.7 million – of the $400 million it promised in December 2016 to collect over two years for cholera eradication in Haiti.

In the end, Mr. Wane openly admitted that Haitians do not enjoy sovereignty. “I would just like to tell you that, even if we differ on the best way to help Haiti – you think that the mission did not help – we believe that the mission can help Haiti,” he concluded. “I am convinced that our objectives are basically the same. We all want a democratic Haiti, a prosperous Haiti, a Haiti where the Haitian people will fully take charge of their own destiny.”

“I think this meeting showed us how UN officials are hypocrites,” said Barbara Corrales, a member of a dissident current in the Brazilian Workers Party (PT) and a founder of “To Defend Haiti is to Defend Ourselves.” “They say that they respect our opinions but that the UN record in Haiti, including the cholera, was acceptable. And since the job they did was so good, they are going to send another mission, supposedly to support justice and peace, even though it is composed of armed people. We denounce this as proof that the UN does not want peace in Haiti.”

Below is the delegation’s joint letter to the UN.

First of all, we thank you for receiving our delegation at UN Headquarters.

This delegation represents dozens of organizations and personalities from the Americas, who have been fighting for 13 years for the withdrawal of UN troops, MINUSTAH, from Haiti.

We are responding to the appeal of the “Haitian Coordination for the Withdrawal of UN Troops,” signed by more than 20 trade union organizations, workers, peasants, students, grassroots organizations, progressive democratic movements, women’s organizations, citizens of Haiti’s working-class neighborhoods, which states (extracts):

“For 13 years, MINUSTAH has been destroying the freedoms of the people. MINUSTAH is located in the country illegally to:

– Suppress the democratic rights and freedoms of the Haitian people

– Strengthen the state machine against the workers and the Haitian people; (…)

For 13 years, Haitian presidents have agreed to sign the renewal of MINUSTAH’s mandate. Such an act is totally opposed to the Haitian Constitution which stipulates in article 263-1: ‘No other armed body can exist on the national territory.’ So MINUSTAH’s presence in the country is a flagrant violation of this constitution.

“For the past 13 years, countries that often call themselves ‘friends’ of Haiti and which are also countries with veto power in the United Nations Security Council, continue to issue orders and commands to the puppet presidents in Haiti to blindly sign. The Haitian Coordination also denounces the UN’s behavior with regard to the case of the cholera victims. After years of fighting, the UN recognized that it was the carrier of the cholera virus into Haiti by means of its Nepalese contingent. But until now, no provision has been made to compensate all the victims.”

Now the UN has decided to transform MINUSTAH forces into MINUJUSTH: the UN Mission to Support Justice in Haiti, starting in mid-October 2017.

” Indeed, the Security Council is well aware that the presence it installed in 2004, as well as that of yet another so-called Peace and Stabilization Mission approved to begin in October, are widely considered an occupation, alien to the ideals of the UN and the rights and objectives reaffirmed time and again by the Council itself.

“The worsening of the systemic and humanitarian crisis in Haiti reflects this evaluation, in addition furthermore to the infamous balance in human rights and impunity.”

“In relation to the objectives set for that visit, we hope above all that it will lead to concrete recommendations and measures that contribute to settling the immense debt that has been accumulated with the Haitian people, by the Council itself, the UN and the countries that have contributed troops, police and resources to MINUSTAH over its 13 years: a debt to the people who are victims of the MINUSTAH’s catastrophic balance in human rights terms.

“This debt now defines the lives of these people as well as the legacy of the MINUSTAH, seriously undermining the credibility of any future UN action in Haiti. It is a debt to the people of Haiti as a whole, in particular to the women and young people who were raped and sexually exploited by members of the Mission, the neighbors who suffered the military and police repression – such as in Cité Soleil, where MINUSTAH troops intervened 15 times with lethal weapons, sometimes firing more than 25,000 bullets in a single operation – and the hundreds of thousands of people and families who suffer death and disease due to the introduction of cholera.

“We urge you in particular to give priority to consultation and direct exchange with representatives of Haitian popular movements and organizations and of groups of victims of cholera and other human rights abuses committed by the UN, (…) It is also indispensable given the weakness of Haitian public institutions, including governing bodies elected on the basis of minimal suffrage after the international community’s repeated interventions in their country.”

In fact, the presence of the UN’s occupying troops is directly or indirectly responsible for the exactions, the rights violations, and the repression committed against Haitians:

– thousands of rapes by soldiers of the MINUSTAH left thousands of orphans in Haiti, aggravating misery and dissolution of its social fabric;

– armed incursions, the memory of which still disturbs people’s sleep, into popular districts such as of Cité Soleil, Bel-air, Fort National, and Martissant;

– political interference to impose massive electoral fraud to establish a political power subject to the interests of foreign powers.

The right of the workers and people to organize and demonstrate, even if it is provided for in the Haitian Constitution, is threatened by the repression that strikes those who do not accept the occupation.

At this moment, the CTSP also denounces human and trade union rights violations by employers in export processing zones in the textile sector, the bullying of trade union leaders and delegates by the police, and the systematic dismissal of trade union leaders: in two months, GOSTTRA-CTSP, for example, saw the dismissal of all its leaders in this sector. And the CTSP adds: “People placed both by Haitian law and by international bodies to enforce these rights close their eyes and say nothing about the disregard for human and trade union rights in this sector.”

Consequently, we members of this delegation,

– affirm our total agreement with the remarks and requests made by the representatives of Haitian organizations, personalities and associations as well as the recommendations made by the Nobel Peace Prize laureates;

– support the report made by the CTSP, the IJDH, the BAI, the trade unions, students and the popular organizations about the and threats to the life of MOLEGHAF members;

– Demand the withdrawal of all forms of occupation and interference by the UN from Haitian soil, and compensation for all victims, especially the victims of cholera.

Rain of Sanctions Augurs U.S.-Prodded Regime Change in Haiti from Musseau to Montana