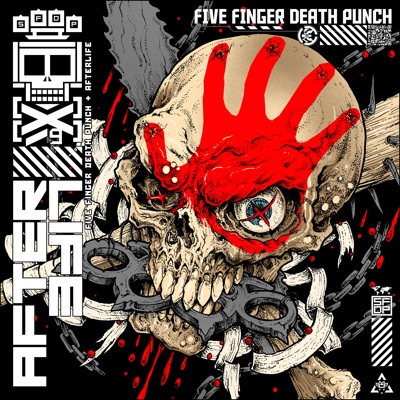 Five Finger Death Punch have announced their ninth studio album, AfterLife, and have previewed what is dubbed the band’s “most diverse” effort to date by dropping the record’s angsty title track.

While there’s no official release date yet, AfterLife is set to arrive later this year, and will see the five-piece join forces once again with longtime collaborator Kevin Churko, who helmed production duties for the album.

AfterLife will also be the first studio LP from FFDP to feature new guitarist Andy James, who was initially recruited to the lineup after previous lead guitarist Jason Hook was forced to retire from the band’s European tour in February 2020.

James was formally announced as a permanent band member in October of that year, after Hook officially left the heavy metal outfit.

It’s a stellar start for James and his bandmates, who look to make good on the claim that AfterLife is set to be an unexpectedly diverse installment to their discography. A relatively tame, reverb-drowned intro of clean guitars precedes a regimented march of snare rolls and electric guitar lead lines, before the track unleashes the bruising main hook.

A brief breakdown at the 2:30 mark ushers in an even briefer yet wholly scintillating guitar solo, which squeezes in a smattering of face-melting runs and a wailing finale bend into its remarkably modest runtime.

When it arrives, AfterLife will be the band’s first album since 2020’s F8.
Accompanying the album announcement is news of a sprawling North American tour, which will see Five Finger Death Punch hit the road with Megadeth. Additional support will be provided by The HU and Fire From The Gods.

The tour will commence on August 19 at Ridgefield, Washington’s RV INN Style Resorts Amphitheater, and is currently slated to conclude at West Valley City, Utah’s USANA Amphitheater on October 15.

Tickets will go on sale this Friday (April 15) at 10 a.m. local time.
And, if that wasn’t enough, the band is also launching today its Five Finger Death Punch Fan App – a stand-alone Apple, Android and Google Play app that grants user access to “a community for the most diehard fans.”

Those who download the app will also be given access to purchasing presale tickets starting today (April 12) for the upcoming tour.